The Electoral Commission is warning that tens of thousands of people may lose the chance to vote in the upcoming local elections.

It said $20,000 enrolment update packs mailed out have been returned as "Gone, no address". 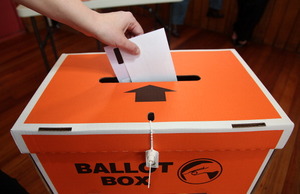 Up to 20,000 enrolment packs have been returned after residents moved without providing a forward address.

The commission has sent update packs to the 3.1 million people on the electoral roll at the end of June, in order to ensure all those eligible to vote are correctly enrolled to do so.

More than 135,000 people have updated their details but 20,000 packs have been returned because the voter has moved without leaving a forwarding address.

The commission says those people have been removed from the roll and won't be able to vote unless they re-enrol.

It says the elections are by postal vote, so it is important people are enrolled at the right address.