A New Zealand-funded housing development in Kiribati aims to ease overcrowding on the main island of Tarawa.

While in Kiribati, Mr McCully opened a new housing project funded by NZAid, which paid for 62 new homes for public servants.

He said the aid programme tried to redevelop an area that was less appealing, to make the best use of the space available on the tiny island.

"Clearly it's not sustainable to have 100,000 people living on that little island long term, so we need a mix of policies.

"The government there's got to take its responsibility to ensure that people aren't drawn in from the outer islands due to a lack of activity there, got to take a leadership in terms of how some of the government land's used."

But Mr McCully said partners such as New Zealand would have to do something as well.

Mr McCully and the European Commissioner for International Co-operation and Development, Neven Mimica, are leading a joint mission to the Pacific, accompanied by Minister for Climate Change Issues Paula Bennett.

The mission will travel to Papua New Guinea, Vanuatu, Kiribati, and Tuvalu.

Mr McCully said New Zealand and the European Union worked together closely in the Pacific, especially in support of renewable energy initiatives. 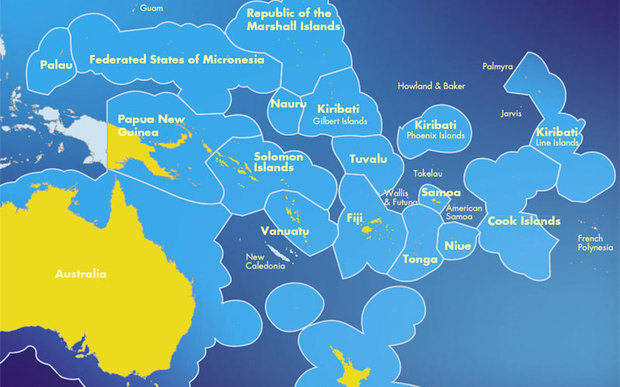 Map of the Pacific Photo: RNZ/Supplied?