More pressure is being put on the Overseas Investment Office (OIO) with the Labour Party saying it has evidence other foreign companies should have failed the good character test.

The OIO had to apologise for failing to conduct a robust inquiry when it approved the sale of Onetai Station in Taranaki to two Argentine brothers.

Rafael and Federico Grozovsky - who bought Onetai Station in 2014 - had been found criminally responsible for chemical dumping from their tannery near Buenos Aires.

Land Information Minister Louise Upston said the one OIO worker who had the information did not put it in application documents which were sent on to ministers. RNZ News understands that person no longer works for the office.

The Argentine brothers had also signed a statutory declaration stating that they did not have any convictions.

Ms Upston was confident the failure was a one-off.

But Labour Party MP David Cunliffe said there had been more mistakes and over the next few days he would produce evidence to back that up.

"I'd say it's the tip of the iceberg. In fact it's a system failure. The OIO has principally relying on statutory declarations by investors ...they can't even do a proper Google search. This place is really not doing its job to protect New Zealanders."

The government has ordered an independent review of how the OIO carried out its good character tests and how it collected the information for ministers. 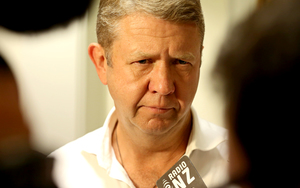 But the government would not say whether the inquiry would trawl through individual applications, looking for similar problems to the Argentine case.

Mr Cunliffe said it should examine at least a handful of them over the past few years.

"To give us certainty, it needs to go through at least a good number of them, and I hope it will.

"I'm pleased the government has finally caught up and said it should be an independent review because it was always a joke that OIO would be asked to review itself."

New Zealand First leader Winston Peters said he was not surprised the OIO had let the government down.

"The Overseas Investment Office is just a rubber stamp. It's a disgrace actually for a nation to have such a body in charge of any of its policing of the rules and the laws."

The tannery at the centre of the Grozovsky brothers' prosecution reopened following the case and is still operating.

Buenos Aires Herald environmental journalist Fermin Koop said residents close to the La Plata River, where a number of tanning and other factories are located, are still complaining about health problems.

There was no remediation of land since 2011 , he said.