Power Play - The "teapot tape" saga is a cautionary tale of how political stunts can go wrong, and have costly consequences. 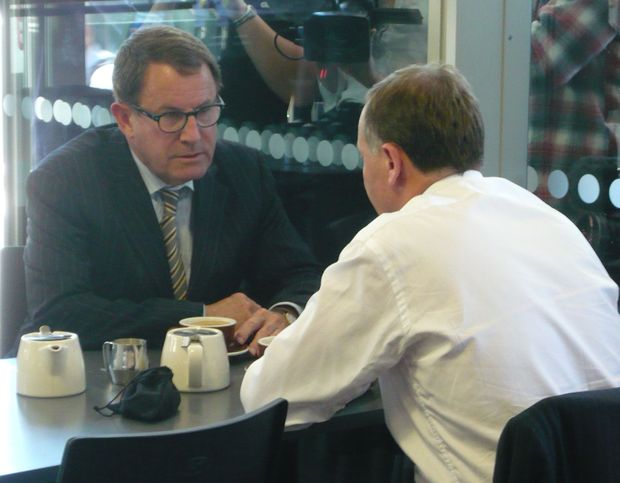 John Banks and John Key at the cafe in November 2011. Photo: RNZ

It all started with political manipulation.

Journalists were invited to witness Prime Minister and National Party leader John Key and the then ACT candidate for Epsom John Banks, having a cup of tea.

It was a direct message to National voters in the Auckland electorate to vote for Mr Banks, giving ACT at least one MP and providing a solid support partner for a National-led government.

But it all went wrong.

Only freelance journalist Bradley Ambrose will ever know whether or not he deliberately left a recording device, enclosed in a small black bag, on the table with Mr Key and Mr Banks, but he has always maintained it was accidental.

The politicians cried foul claiming Mr Ambrose had broken the law because he had disclosed a recording of what was supposed to be a "private conservation".

Under New Zealand law it is illegal to record a conversation unless at least one party is aware it is being recorded.

The other determining factor of whether a conversation is private is whether those talking can reasonably expect it could be intercepted.

A bit of a stretch then to argue it was private when you have invited the nation's media to an event and then usher them outside so you can have a private "tete-a tete" in the full view of a large group of journalists and cameras.

Regardless, Mr Key lashed out, and made comments Mr Ambrose would later claim were defamatory and damaged his reputation.

Mr Key also laid a complaint with the police that resulted in search warrants being served on four newsrooms.

The police found the recording was illegal, at the least "reckless" and "more likely, deliberate", but that it was not in the public interest to prosecute.

However it was Mr Key's comments about Mr Ambrose's conduct as a journalist that led to the settlement payment he has now agreed to pay.

Actually, not Mr Key himself. His office first looked to taxpayers to cover the cost, but blocked by Parliament's rules, the money will likely come out of the National Party's coffers.

The taxpayer will, however, fork out for all of the costs of the legal action leading up to the settlement. Not that the public will know how much that is. Mr Key is refusing to reveal the amount and Parliamentary Service is using its exemption from the Official Information Act to do the same.

Mr Key argues he was acting as the leader of the National Party when he met with Mr Banks.

He was also acting as the party leader when he made the assertions about Mr Ambrose's conduct - however it was his own personal choice to use the accusatory language and respond in the way he did.

Mr Key has a knack for turning the public mood against the media when it suits him, but as the Ambrose settlement shows, such tactics can have adverse consequences.

Over the past few years there have been three notable cases where journalists have ended up on the other side of the government in court.

Nicky Hager recently won a case against the police after the High Court found the police had executed an illegal warrant in the hunt for his source for the book Dirty Politics, that came out just before the 2014 election.

As well as being illegal, the police actions raised questions about media freedom and the protection of journalistic sources, which is accorded a high level of protection in New Zealand and under case law.

Another freelancer, Jon Stephenson, reached a settlement with the Defence Force after it issued a news statement suggesting he lied about a story he did in Afghanistan.

That also cost the taxpayer hundreds of thousands of dollars and prompted accusations of a government smear campaign.

Journalists have to step carefully when broadcasting or publishing stories about politicians or other public figures to avoid defaming them.

The Ambrose settlement should send a message to politicians and government officials they should do the same.