Some Aucklanders say the alternative flag design now flying over the harbour bridge may be politically motivated, but it does offer a good chance to see it in action. 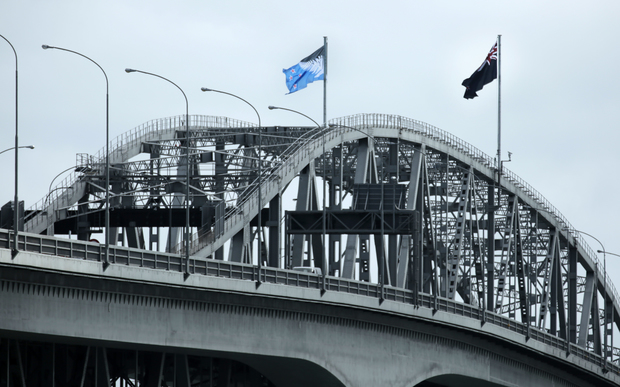 From today, the current national flag and the alternative Silver Fern design which won the first flag referendum, will fly together from the bridge until the second referendum in March.

Transport Minister Simon Bridges approved flying the contender after receiving a request from the Flag Consideration Project and said the government was being fair.

But New Zealand First leader Winston Peters said the government was waging a propaganda war on the public.

Far from it being about fairness, he said the government was simply promoting the Prime Minister John Key's preferred flag.

On the bridge today, Aucklanders were divided over whether it was good to see the new flag flying.

One person felt like it was pressuring people to vote for the new flag, while another said it was a great thing, during an interesting time for the country.

A woman who hadn't realised both flags were flying, said it reflected how much interest she had in the issue.

Others said there was no reason why it shouldn't fly, and provided people an opportunity to see what both the new and old flags looked like.

The second flag referendum will be from 3-24 March and the preliminary result should be known about 7pm on 24 March.