The Trans-Pacific Partnership (TPP) will be signed in Auckland in two weeks, the government has confirmed. 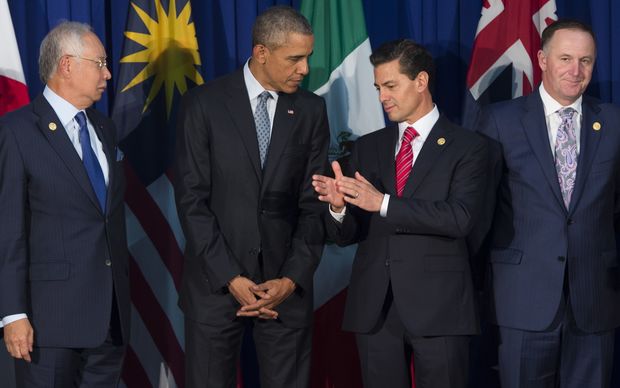 The confirmation comes a fortnight after the Chilean government announced that the signing would go ahead in New Zealand on 4 February - news the New Zealand government refused to confirm last week, saying the arrangements had not been decided on.

Trade Minister Todd McClay said the signing on 4 February will mark the end of the TPP negotiating process, after which all 12 countries will have up to two years to ratify the agreement before it enters into force.

Following the signing, the government will submit the final text of the TPP and the National Interest Analysis to Parliament.

Mr McClay said during the period before the agreement enters into force, the government would be running a series of roadshows throughout the country.

The 12-nation TPP trade deal was concluded in October after five years of negotiations and a marathon final session of talks in the United States.

Under the agreement, New Zealand joins a club that accounts for 40 percent of the world economy.

The TPP will eliminate tariffs on 93 percent of New Zealand's exports to the United States, Japan, Canada, Mexico, and Peru. The government estimates the agreement will be worth at least $2.7 billion a year by 2030 for New Zealand.

For the dairy industry there were gains such as the removal of tariffs on some cheeses and infant formula in the United States within 10 years, but whole milk powder improvements remained elusive. Canada offered only limited new access, with just an extra 3.25 percent for dairy on top of the country's annual production.

TPP opponents have criticised secrecy around the deal, and remain convinced there will be changes to the Pharmac model though the government has said that will not be the case.

The Sustainability Council says the environment will suffer under the final text of the TPP, which it says it failed to protect the government from being sued by foreign investors if they believed that their future profits were at stake.

There were provisions that protected governments from being sued for acting to reduce smoking but no similar protections for acting to protect the environment or tackle climate change, the council said.

Confirmation of the signing comes as research on the trade deal by senior law lecturers argues it fails to meet obligations to Maori and conflicts with the Treaty of Waitangi.

Report co-author Carwyn Jones of Victoria University said there was a treaty exception in the deal but it was open to interpretation and relied on the government's good will.

He said Maori already have difficulty engaging with the government on matters like the environment and intellectual property and the TPP will only make that worse.

However Trade Minister Todd McClay said nothing in the TPP would prevent the Crown meeting its obligations to Maori.

The Waitangi Tribunal will hold an urgent hearing in March to discuss the Trans-Pacific Partnership.

Ngapuhi elder Kingi Taurua had suggested the gates of Te Tii Marae should be closed if the government had signed the trade deal before 6 February.

Mr Harawira said the TPP was an attack on Maori and the rights of all New Zealanders, and would be heavily discussed by groups coming from all around the country to Waitangi.

"And I think that when the prime minister arrives on the 5th when he's due to arrive, that it's certainly going to be raised there.

"It's going to be quite a tempestuous situation, I'd say."