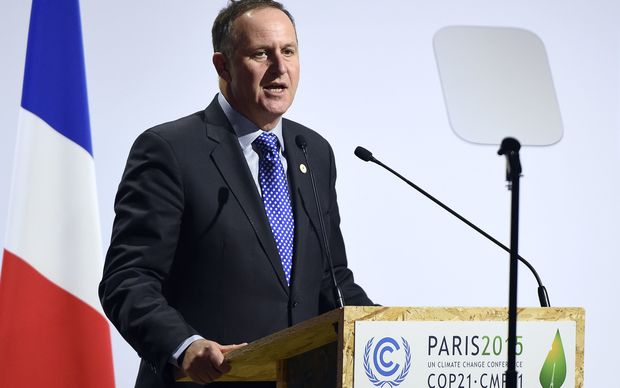 John Key at the opening of the COP21 climate change talks in Paris. Photo: AFP

Delegates from 196 countries unanimously agreed to the deal after long negotiations at the UN's COP21 climate change conference in Paris.

The main aim is to keep global temperature rises "well below" 2°C, with an aspirational target of limiting the rise to 1.5°. Some aspects of the agreement will be legally binding, such as submitting emission reduction targets and the regular review of those goals.

Mr Key told Morning Report New Zealand's significant steps on emission reduction would not involve cutting back on the mining of oil, gas and coal.

"Not in terms of the production side of the house, if you like ... I can't exactly tell you off the top of my head how many barrels of oil we produce a day but it would be what Saudi Arabia, Iraq and those other countries, Iran, produce in a nano-second. It's just not large."

Mr Key said New Zealand was just being consistent with what other countries were doing.

"The world's going to continue to consume some of these products and we can't stop that. The question is, can we get them to transition more rapidly to other forms of renewable energy? The answer is yes. But one of the fastest ways to do that is to stop the subsidisation of the consumption of fossil fuels and that's really what the fossil fuel subsidy reform's about.

"New Zealand could, of course, just stop producing oil and gas and coal but realistically if we did that I don't believe it would stop it being consumed. I think the rest of the world would just fill the very small gap we would leave."

Mr Key said despite that New Zealand would have to make significant changes, which could cost households $100 a year, to reduce emissions. That would include increasing the country's use of renewable energy from 80 percent to 90 percent of its total energy use.

"You will see a push towards electric cars. I think you are going to have to see from New Zealand's point of view a scientific solution to our agriculture emissions and frankly more happening in the sort of commercial sector. So there's a lot of changes there. They're all do-able but we'll just need to push hard on those."

"We'll get New Zealanders to fully support the changes required for climate change when we're seen to be consistent, equitable, fair basically."

On agriculture, he said the Government put a lot of importance on science finding solutions to emissions.

"But I think in our defence you wouldn't say it's a sort of, you know, pay and hope policy when it comes to science and innovation in so much that we know a lot of good work has been done already. We're not talking about small amounts of ... change going in. I mean New Zealand's putting in a huge amount. But actually there are 45 countries with us and they are really focused on this issue."

Mr Key said it was just impossible to believe that with all the money being spent and effort being made that there would not be technological solutions found to reduce agricultural emissions.

"That in itself is a stretch - there's no doubt about it. Treasury has estimated [the cost at] over $30 billion, about $1350 per household, and that's what we'll do."

Mr Groser said no change in goverment policy was needed in the short term, but in the long run, New Zealand would have to do more to meet the agreement. Part of that would be finding technical solutions to agricultural emissions.

Environmental groups have said the government would need to backtrack on some of its policies in order to meet the commitments it made in Paris.

Greenpeace New Zealand executive director Russel Normans said, "The policies of the New Zealand government not only don't match the commitments they made at the Paris meeting, but they certainly don't come anywhere near the global goal of only 1.5°C of warming."

"At the end of the day the accounting games and tricks have to end and governments, not just the New Zealand government, need to put in place real policies." 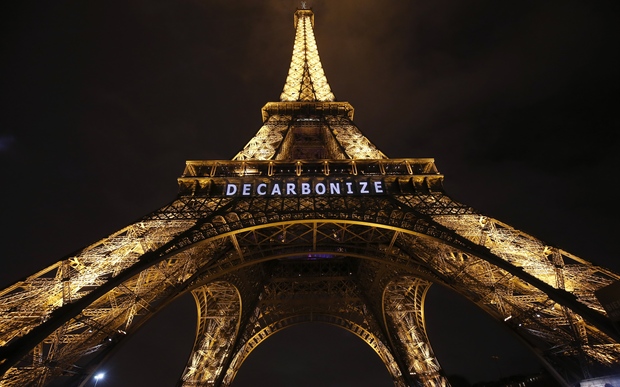