National MP Judith Collins will be returned to Cabinet to take over the Corrections portfolio from Sam Lotu-Iiga in a reshuffle to be announced today, RNZ News understands. 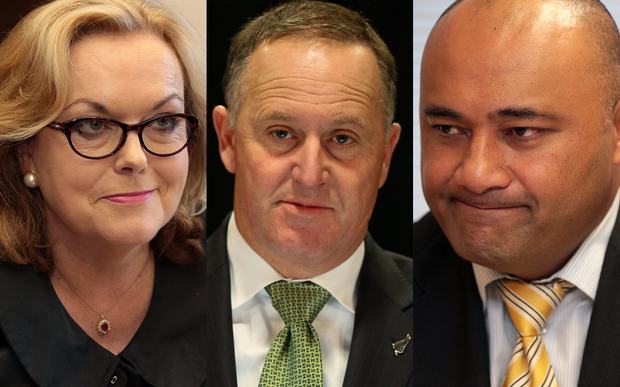 John Key, centre, has taken the Corrections portfolio from Sam Lotu-liga, right, and given it to Judith Collins, left Photo: RNZ

While Mr Lotu-Iiga will lose Corrections, he will keep his other portfolios.

Trade Minister Tim Groser is to quit Parliament to take up the position of New Zealand's ambassador to the United States.

Ms Collins will take Mr Groser's number 16 spot in the Cabinet line-up, but Todd McClay will pick up his trade portfolio.

Earlier on Morning Report, Prime Minister John Key would not be drawn on detail of the changes.

"What I'm going to do is announce a minor reshuffle," he said. "Not a great many" portfolios would change hands. "In the scheme of things, not a significant reshuffle."

"Cabinet's performing, I think, extremely well. There are always challenges in government - that's the nature of government - but for the most part I think we're doing pretty well, so I'm actually happy with the team, so I'm not looking to make tremendous changes.

Mr Lotu-liga has been under pressure during his tenure as Corrections Minister, including facing questions in Parliament over the management of Mt Eden prison by private operator Serco, but in Julyrejected calls for his resignation.

Mr Key said a new ambassador to the United States would need to be appointed to replace Mike Moore who suffered a stroke earlier this year and was returning from Washington for health reasons, though he would not elaborate.

Ms Collins resigned just weeks before last year's election after allegations she was involved in a campaign to discredit the then head of the Serious Fraud Office, Adam Feeley.

She was cleared of any involvement after an investigation by a High Court Justice.

The MP had made it clear she wanted to be in Cabinet - but said the decision was up to the Prime Minister.