Closing in on the end of the year, the RNZ Poll of Polls is close to where it was shortly after the beginning: Labour up a bit and National down a bit, but National still with a handy lead over Labour and the Greens combined. 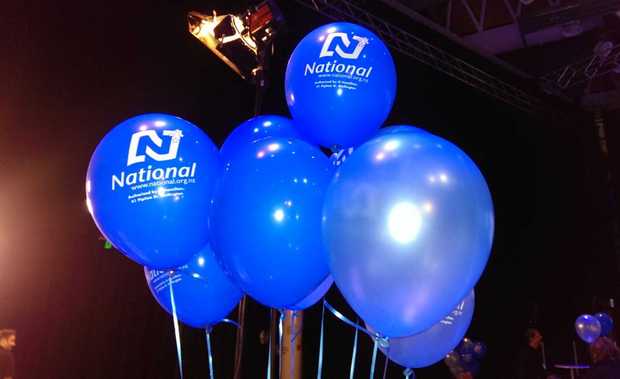 There was a brief time midyear when, amidst bad news on the economy which temporarily softened consumer confidence, Labour-plus-Greens headed National. But that was quickly reversed, and the readings of economic confidence and whether the country was on the right or wrong track, firmed up again through the spring.

Labour optimists might argue that there has been a 15-month downward trend in National's lead but, if so, it is not the sort of trend that by this time next year will be heralding a looming victory with the Greens in 2017. 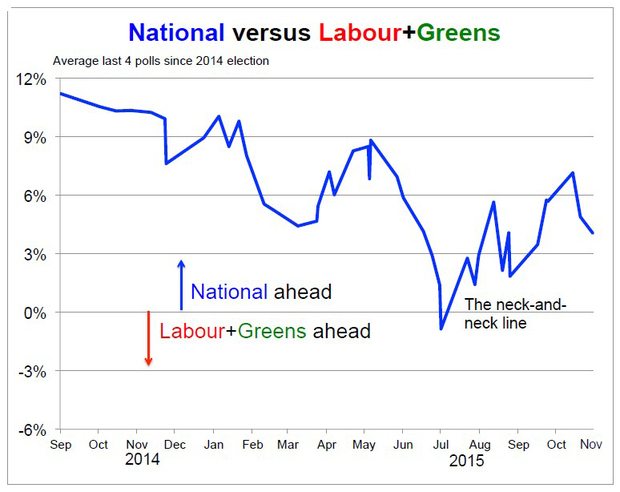 Moreover, National's poll average of 47.3% through 2015 up to November is right up with its 2014 election result of 47.0%. That correlates with John Key's continued very strong personal popularity readings. National's latest average was 46.7%.

Labour had clawed its way to a 30.9% average by February/early March. That, however, was in effect no more than a reversal of the plunge in its support in 2014 as the election approached, when some voters looked at alternatives such as New Zealand First as a means to constrain National, after they concluded there was not a visible, viable alternative government.

Labour's latest average was also 30.9% - in other words, zero gain since February. By this time next year Labour will need at least five percentage points more than that to be a convincing challenger going into the 2017 election year. Its 2015 average to November was 30.4%.

Still, if the Greens can hold roughly that level and Labour can somehow add five percentage points by election day, that would get the two parties close to, or even over, the line.

That brings New Zealand First into focus. Given the miniscule support for National's three support parties and the evaporation of the Conservatives (latest average 0.7%) and the unlikelihood National can get 47% for a third time in 2017, New Zealand First can contemplate playing a decider role. Its latest average was 7.6% (average for the year to November 7.1%). 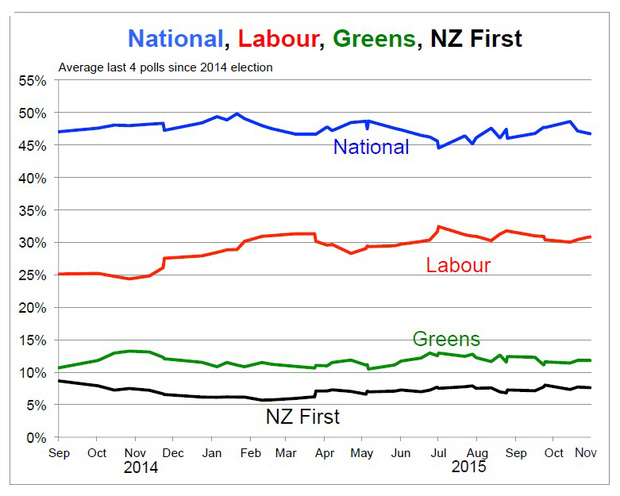 * The poll-of-polls is an arithmetical average of the four most recent major polls from among: TV One Colmar Brunton, TV3 Reid Research, Fairfax Media-Ipsos, NZ Herald DigiPoll, Roy Morgan New Zealand and UMR Research, which is not published. The four polls in the most recent average were, in order of interviewing, Colmar Brunton (October), Morgan, UMR, and Reid Research (all in November). The first point on the charts is the actual 2014 election result.