The widow of a forestry worker killed on the job held a silent vigil outside the National Party's annual conference in Auckland on Sunday morning to protest the watering down of proposed workplace safety laws. 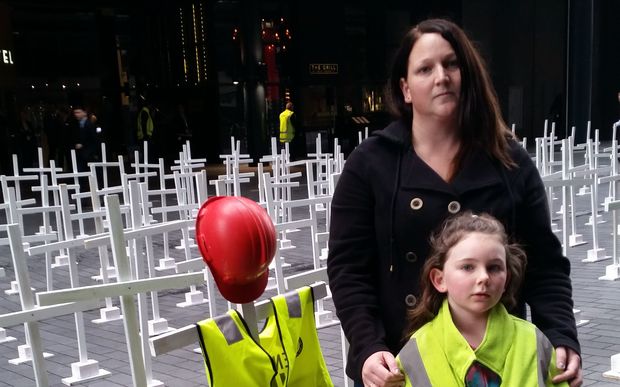 Deborah McMillan and her daughter Skylar, 8. Her husband Shane McMillan was killed in a forestry accident in 2009. Photo: RNZ / Demelza Leslie

The Government has confirmed the Health and Safety Reform Bill will not require small businesses with fewer than 20 employees to have elected health and safety representatives.

Deborah McMillan has set up 291 white crosses outside the conference venue, Sky City, to represent the number of workers who have died at work since 2010, when the Prime Minister promised to make changes.

Her husband Shane was killed in 2009 when a branch fell on him while he was working in a forestry gang near Napier.

Their eight year-old daughter Skylar was three at the time.

Mrs McMillan said the Government shouldn't be excluding small businesses, such as the one her husband worked for, from having worker health and safety representatives.

"Skylar will place her dad's work jacket and a helmet on the 291st cross," Mrs McMillan said.

"We've had ten Pike Rivers since John Key promised to improve work safety laws in 2010," she said. "Not only has he broken his promise, he wants to make it worse."

Mrs McMillan said it was an awful double kick in the guts for her family as Shane had died working in a small business.

"Many of the Pike River men worked in small businesses too."

The Council of Trade Unions helped the McMillan family put up the crosses.

Union spokesperson Strachan Crang said a minority of small businesses lobbied the Government to water down the bill, including farmers and other industries with a terrible track record for workplace safety.

He said they were playing politics with workers lives.