After four years of promising a surplus this financial year Thursday's Budget is going to confirm the Government has broken that pledge.

Finance Minister Bill English said recording a deficit again would not matter but Opposition parties said it proved National could not be trusted to manage the government books. 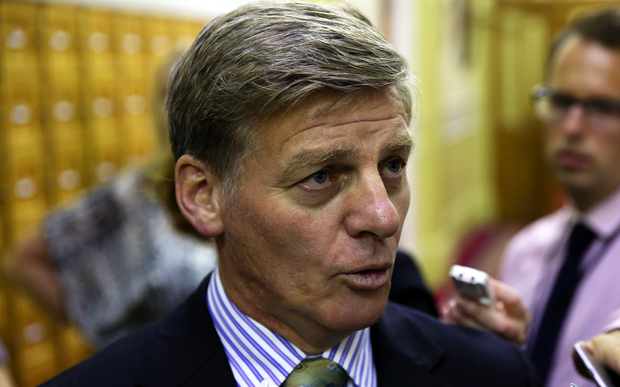 Finance Minister Bill English had been talking about a promised surplus for some time. Photo: RNZ / Alexander Robertson

Former Finance Minister and Prime Minister the late Sir Robert Muldoon once said people would not know a deficit if they fell over it.

But the Labour Party's finance spokesperson Grant Robertson said the public were sure to know about this deficit.

"One of the reasons for that is because this is the number one promise that the National Party made in their pre-election commitments. It sat right at the top of their commitments on the economy.

"Bill English and John Key talked about it hundreds of times during the general election campaign. Every election meeting that I attended as a candidate, the promise to make surplus was raised," Mr Robertson said.

"I think people do care. They do care about the failed economic management.

"They do care that they're seeing no benefits from the economy in their own lives... Families are looking at how they're doing and they're seeing they aren't getting ahead," Mrs Turei said.

Mr English said the public did care about the state of the public accounts.

"Yes, I think the public understand most importantly the direction of the Government's books. They're probably not that focused on all the accounting and macro-economic adjustments that deliver a particular number on any given month or year," he said

He said what was important was that the Government's books were heading towards a surplus even if they would not get there this year.

"It's pretty important because it allows us to start paying down the debt that we've run up over the last five or six years getting through the earthquake and the recession...

"[The] current situation is the government's books are headed in the right direction but taking a bit longer to get to surplus than we expected, but that doesn't mean it's any less important a target."

Each year the Government runs a deficit it drives public debt up further, and that comes at a cost.

For instance, at the moment financing debt costs taxpayers about $4 billion a year, expected to rise close to $5 billion by 2018.

"How much debt do we want? I mean at the moment our debt is at an astonishing high number under this government over six, now almost seven, times what they inherited...

"Then the country's carrying a massive, you know, $214 billion in mortgage debt. That's double what it was 10 years ago," he said.

But the public debt compares with the early 1990s when it was so high the Government spent more on interest costs than it did on education.

From the mid-1990s, both National and Labour governments ran surpluses and reduced debt.

It meant this National-led Government was in a strong financial position to respond to both the global financial crisis and the Canterbury earthquakes.

But Mr Robertson said it had now failed.

"[Former Labour Finance Minister] Michael Cullen delivered nine surpluses. Bill English will stand up this week and deliver his seventh deficit. That's the failure of this Budget," he said.