The Auckland District Court has dismissed an attempt by private litigant Graham McCready to have the Prime Minister charged with assault. 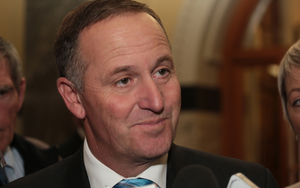 Mr McCready had sought permission to prosecute John Key over his conduct in repeatedly pulling the ponytail of Auckland waitress Amanda Bailey.

But Chief District Court Judge Jan-Marie Doogue has ruled there is not enough evidence to justify a trial.

Mr McCready said he would take legal advice and decide whether to review or appeal against the judgment.

He said if Ms Bailey were prepared to make a formal statement, then the charging document could be refiled.

The Prime Minister said he hoped to put the incident behind him.

"In the end, I'm not really going to engage with the guy, he's free to do what he wants to do. The court's obviously ruled on it, and that's the end of the matter as far as I'm concerned.

"People will judge it for what it is, and that's it, basically."