The Prime Minister has rejected any suggestion that government MPs having property investments is a conflict of interest.

Opposition parties say the number with such housing investments is likely to have influenced the Government's response to what they say is a housing bubble in the country's biggest city.

The latest register of pecuniary interests has again revealed how many investment properties MPs have and the vast majority are held by members of the National Party.

New Zealand First leader Winston Peters said that was bound to influence their views about the housing crisis in Auckland.

"This is not to criticise any of the investments that MPs might have taken but it sure explains their prejudice against taking the right steps to flatten out the Auckland housing market which is rising at such a level that no one can save that much.

"A whole generation of people are being shut out of the home ownership dream in New Zealand, particularly in Auckland," Mr Peters said.

Mr Key told Morning Report the problem in Auckland was related to supply, not property ownership by MPs. 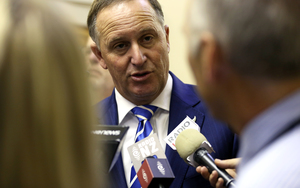 "That's nonsense. I mean, Parliament all the time considers things like tax laws, and we're all taxpayers.

"I think you've got to give people the benefit of the doubt ... parliamentarians do look at the wider issues that they have to consider."

"It's a ... bit of a conspiracy theory. I mean MPs probably have views, you know, similar sort of patterns with their finances as other people with similar incomes," Mr English said.

Labour Party finance spokesperson Grant Robertson was also not so sure that National MPs' investments in property were behind the Government's approach to the Auckland housing problem.

"Some people have suggested it's to do with the number of donors they've got who are property investors, other people are suggesting this. The bottom line is I don't think many Aucklanders will care much about that. They just want to see some action," Mr Robertson said.

Indeed 15 Labour MPs own a second property or more, while five Green MPs do.

Seven New Zealand First MPs own a second property, including Winston Peters, although most of those are holiday homes.

"Mr Joyce has gone around the country boring audiences witless with his statements about alternative investment and new and exciting, you know, sunrise industries. Excepting his MPs don't think that there's any hope in that and they're going down the other path of property investment and being landlords," he said.

Mr English said government policy did have to deal with the perception that house prices would rise rapidly forever, particularly for those people who had bought recently.

"There is more risk there than perhaps they've got in mind and the current focus on, you know, the supply and demand pressures that drive the market I think is going to, you know, lead New Zealand to some better solution which will make our housing markets a bit less volatile and therefore a bit less prone to these rushes of enthusiasm," he said.

Mr English again ruled out introducing a capital gains tax, saying voters had made it clear at the past two general elections they did not support such a tax.

And Mr Key said such taxes have been shown elsewhere to be spectacularly unsuccessful.