The Vietnamese Prime Minister has left New Zealand after urging businesses here to increase their investment in his country. 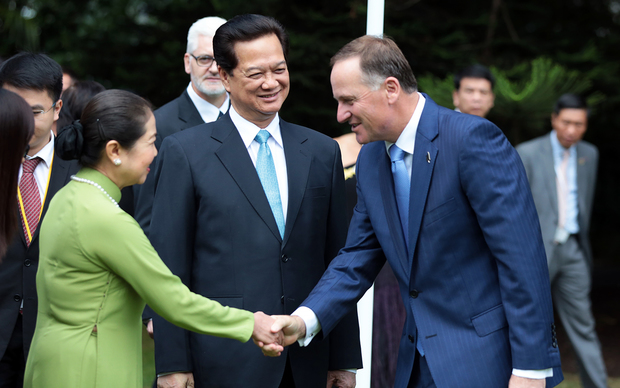 Nguyen Tan Dung said Vietnam was removing barriers to trade and making it easier for businesses to operate there.

Mr Tung led a 130-person delegation to New Zealand after visiting Australia earlier in the week. The delegation included seven senior ministers, most of whom are responsible for business-related portfolios.

Senior Vietnamese business leaders were also on the trip, including from the country's mining, construction and electricity industries.

Mr Dung, speaking through a translator, said Vietnam did face challenges, particularly as it was involved in the negotiations over the Trans-Pacific Partnership (TPP).

"You know that the Vietnamese economy's competitiveness and the competition of the Vietnamese companies and products are limited. This is the biggest challenge to Vietnam in joining in the TPP."

But Mr Dung said Vietnam was making rapid progress in opening up its markets.

It was reducing the influence of state-owned enterprises as it sought to get the private sector to play a bigger role in the economy.

He said Vietnam was keen on encouraging more investment, particularly in transport and energy infrastructure, through the use of public private partnerships.

Yesterday he and Prime Minister John Key announced they wanted to double two-way trade to more than two billion dollars by 2020.

"The whole ASEAN region, of which Vietnam is a major player, has a very specific plan over these next five years to increase trade dramatically right throughout the region. New Zealand-Vietnam is one of those combinations, for want of a better term, that actually has the ability to do that," Mr Kennedy said.

"We consented to facilitate the business communities of the two sides to strengthen the business partnership in agricultural production, education and training," he said.

Mr Kennedy said New Zealand had an advantage in expanding its trading relationship with Vietnam.

During a breakfast meeting Mr Dung was told red tape and bureaucracy in Vietnam made it difficult for New Zealand businesses operating there.

But one of his senior ministers replied that law changes coming into effect in Vietnam in July would make it much easier for them to do business in the country.