New Zealand First leader Winston Peters says he still considers himself the underdog in the Northland by-election campaign despite a poll suggesting he's in front. 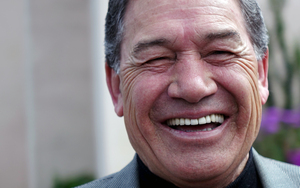 The 3News Reid Research poll of 500 voters conducted this week showed Winston Peters had 35 percent support, ahead of National's Mark Osborne on 30 percent and Willow-Jean Prime on 16 percent.

But Mr Peters said there was no use considering such an early poll as an indicator of the result, and he intended to campaign harder.

"That's why we're the underdog. Because we are up against 50 years of a pattern of loyalty that has in return got the people here very little.

"And it's demonstrated in the reaction of the people now. They've had enough in many cases. And they know that they can change the attitude of Wellington, whilst we don't need to change the government."

But the National Party's bringing in the big guns tomorrow.

The Prime Minister John Key's heading to Northland to campaign alongside Mr Osborne - the first of his three planned visits during the by-election.

"It's a bit more than I normally do with a by-election, it didn't change (due to the poll) it's just part of the focus of us wanting to make sure we retain that seat.

"It's important from the Government's agenda point of view, without that seat it would be much more challenging for us to have the roading projects, the broadband infrastruture projects and in fact the RMA reform that we want," Mr Key says.

National's Mark Osborne acknowledges Mr Peters is a tough competitor but said he was not fazed by the poll.

"It's early days, I was only nominated on Saturday. And we've got to get our traction with our various media and marketing and promotion out there and I'm getting out and about.

"So look, we're only four or five days in and a long way to go, and we're looking forward to getting out there and talking to people and, as I say, not taking anything for granted," Mr Osborne said.

Labour Party candidate Willow-Jean Prime, who was a distant third in the poll, said she too was only interested in the result on 28 March.

She said the poll had made her more determined.

"It gives me more motivation to get out there and continue to campaign as hard as I can to show Northland that they've got an option to have a hardworking, honest and local person to represent them as their member of parliament.

"So I'm not disheartened by those polls, I'm encouraged."

The by-election was triggered by the resignation of the National MP Mike Sabin in January.

The confirmed candidates are: