The Green Party has laid a complaint with the Inspector-General of Intelligence and Security, saying the Government's electronic spy agency may have broken the law. 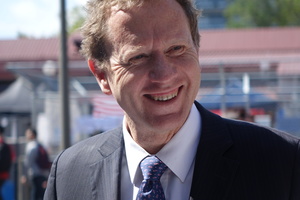 Investigative journalist Nicky Hager says the Government is spying on Pacific nations, and passing that information on to the United States.

His claims are based on information from the American whistle blower Edward Snowden.

Mr Hager said the Government Communications Security Bureau (GCSB) intercepted communications from countries such as Fiji, Tonga, Vanuatu and Samoa, and even nations as small as Tuvalu, Nauru and Kiribati,

Greens' co-leader Russel Norman said it was illegal for the GCSB to spy on New Zealand citizens and permanent residents, but many New Zealanders who live, holiday or work in Pacific Islands may have had their data intercepted by the spy agency.

He said if that was the case then the law may have been broken.

Prime Minister John Key insists the Government's spy agency has acted within the law though will not say how or explain any further.

"We do gather information and we do use our foreign intelligence services, but only within the law and the law forbids us other than in very minor circumstances, from gathering information about New Zealanders."

Mr Key said the GCSB had given him a 100 percent categorical assurance that New Zealanders' information was not gathered other than in circumstances where the law would specifically allow it.

He said he would absolutely not be talking at all about the agency's operational matters.

Mr Key said the Government could talk to Pacific leaders if they wished about actions that may or may not have occurred, but it would not be talking to the media or the public about it.

The Prime Minister of Samoa, Tuilaepa Sa'ilele, was not too bothered about the allegations.

"All our transactions with overseas Governments or organisations are transparent, and we have nothing to hide, so if [anything is] picked up by anybody that will increase the transparency of what we do here."

The Prime Minister of Tonga, Akilisi Pohiva said it would be a pity if trust had been breached between his country and New Zealand.