The Australian Prime Minister Tony Abbott has dismissed speculation his leadership is under threat, saying he believes he has the full confidence of his colleagues. 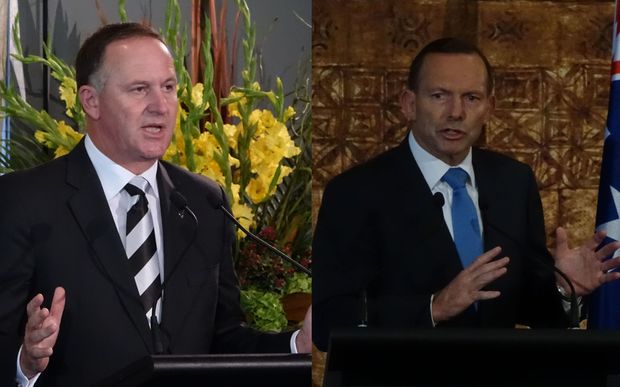 He is in New Zealand for annual talks with John Key, where they discussed the two countries involvement in Iraq, regional security and trade.

Mr Abbott touched down in New Zealand yesterday amid rumours back home that his leadership is in trouble again.

Earlier this month he survived a move on his leadership.

However, the ABC is reporting there is now open despair at Mr Abbott's leadership style within Coalition ranks, even among those who previously supported him.

In Auckland today though, Mr Abbott dismissed the reports as gossip.

"I'm just pushing on with the job, I'm undistracted and undeterred by the hyperventilating which seems to be taking place at least amongst the media."

Mr Key was asked whether he was concerned that Australia was becoming one of the most unstable democracies in the Pacific and whether it had implications for New Zealand.

He told media that it was a 'bit harsh' to describe Australia as an unstable democracy.

"There are always times when there is a bit of turmoil and change and that is the nature of democracy and we should welcome that as long as it happens on a free and fair basis.

"It's not for me to opine on what Australians or politicians do on the other side of the Tasman, but what I can say is that in the time that I have worked alongside Tony Abbott in his capacity as Prime Minister I believe he's been an outstanding Prime Minister."

Mr Abbott said an announcement on a joint mission with New Zealand to Iraq could be made as soon as Tuesday.

Australia already has a 600-strong deployment in Iraq, and New Zealand last week announced it will send 143 soldiers in May to train Iraqi troops in Taji north of Baghdad.

Mr Abbott congratulated Mr Key on his Government's decision to get involved in the fight against Islamic State.

"As our kiwi friends may not appreciate Australia has been involved for some months in the campaign against the [Islamic State] death cult, we've had six of our Super-Hornet strike fighters in the Middle East since last year and we've had up to 200 special forces troops on the ground in Iraq on an advise and assist mission.

"What we are now considering is joining New Zealand on an additional training mission with the Iraqi regular army.

"We still have to finalise our processes in Australia and I expect that that will happen in the next few days and certainly it will be good to see Australia and New Zealand standing should to shoulder together in defence of our interests and our values."