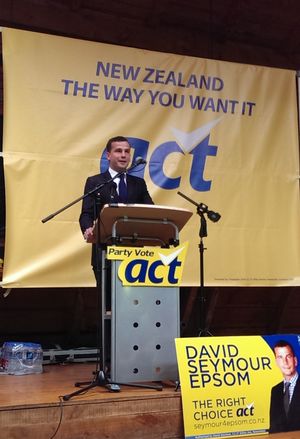 Mr Seymour made the announcement at his party's annual conference north of Auckland today.

David Seymour argued the future burden on New Zealand's superannuation system was an intractable problem, that politicians had been dodging for decades.

He said it was vital that the country ensured superannuation was viable over the longer term, avoided undue fiscal stress and pressure on tax rates, and achieved fairness across generations.

Mr Seymour is proposing an independent body be set up to consult with the community and establish a range of options on which voters could express a view in a referendum.

He is calling on other political parties to support the idea, and said the current standoff over superannuation was untenable.

"John Key has committed to not changing superannuation. Fine. He would not be breaking any promises by letting it go to a referendum.

"I challenge the new Labour Party leader, Andrew Little, to sow some leadership on this issue, [Labour] rather courageously campaigned on raising the age of eligibility at the last election, to your cost. Your party clearly recognised that changes must be made."

ACT got only 0.69 percent of the party vote in the election, although David Seymour won the Epsom seat following a deal with the National Party.

The ACT party, which celebrates its 20 year anniversary this weekend, said its brand was tarnished last year following the election result.

ACT has a challenging goal of returning to Parliament in 2017 with at least five MPs.