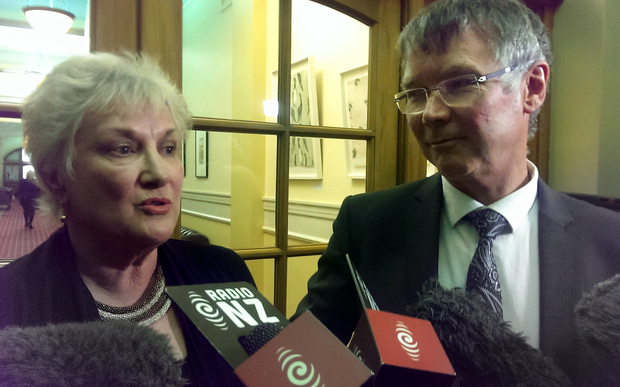 Her comment follows a caucus meeting at Parliament today, during which David Cunliffe officially resigned as leader.

He and Grant Robertson are the only contenders to have publicly declared their intentions.

Ms King said her job was to work with all the caucus in the next few weeks, so everybody went into Parliament knowing their roles.

"We're not trying to shut people up ... and saying how they see things," she told Checkpoint.

"But what we aren't keen to have happen is bricks thrown at members of the party or members of caucus.

"There is a way of being able to express what you feel and we want to keep it seemly."

Ms King said the troubles facing the party were not nearly has bad as what it had been through in the 1980s.

"Look, whenever there is a loss by a party, there is going to be a time of turbulence. I have to say I've been there and seen that before.

David Parker, who was today appointed acting leader, said the caucus wanted a new leader in place by Christmas.

Mr Parker said before the meeting he no longer had confidence in Mr Cunliffe.

"I don't think it's tenable that David Cunliffe continue as leader," he said, but declined to give any reason.

After the meeting, Mr Parker said the timing for the leadership contest was ultimately up to Labour's ruling council.

"It's likely to be over before Christmas. The exact date will be determined by the New Zealand council of the Labour Party on Thursday," Mr Parker said.

Tonight Mr Parker told Checkpoint when he had lost confidence in Mr Cunliffe.

"At the caucus last week, the Tuesday after the election, I tendered my resignation as deputy leader and said that I didn't believe it was tenable for David Cunliffe to continue on as leader and on that basis I thought I should tender my resignation," he said.

The caucus wants to decide on the leadership before a review of its poor election result was completed; the party attracted just 24 percent support, giving it its lowest result since 1922.

That review is not due back until December.

He said after the meeting his caucus colleagues accepted the fact he wanted to seek a fresh mandate and that a new leadership contest would soon be under way.

Asked what his colleagues thought of him once again running for leader, he said: "Well I think there's a spread of views around that. I think that people accept there is a race on and we've got a process for that, and it's a good one."

Mr Cunliffe said in his way into the meeting this morning he was not sure whether he would have caucus support in the leadership contest.

He has criticised some of his opponents by labelling them beltway politicians - criticism which suggests they are out of touch with the concerns of ordinary New Zealanders and which appeared to be directly aimed at Grant Robertson - his only opponent for the leadership so far.