A transcript of David Cunliffe's statement to media at about 2.30pm today following a Labour Party council meeting in Auckland. He said he would resign as leader and seek re-election through a primary contest. 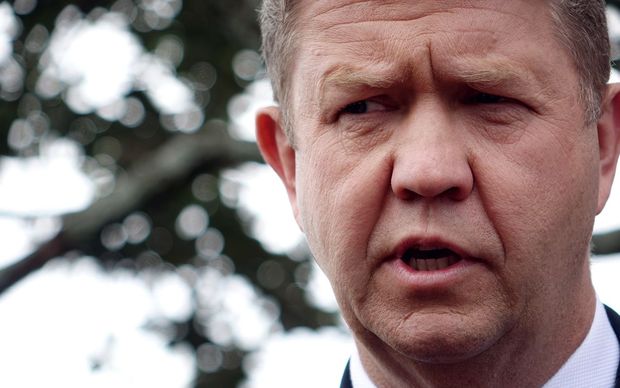 David Cunliffe announces his resignation as leader of the Labour Party to reporters in Auckland. Photo: RNZ / Kim Baker Wilson

Ladies and gentlemen, I have today decided to resign the leadership of the Labour Party, effective the end of caucus this Tuesday.

The party has suffered an historic election loss and in resigning as leader I take responsibility for that.

The party will review all of the contributing factors. That process has begun and I give it my full support.

Labour's values are New Zealand's values. But the election result has reinforced that the Labour Party must change in order to uphold and to communicate those values.

I was elected one year ago with a mandate to lead change.

In that time, I have worked to pull the party and the caucus together and put every resource available to the service of the campaign.

Clearly there is much more to do, and the party's direction must be respected. There is no room for division or airing differences through the media despite agreement to the contrary.

We need to renew and rebuild our culture, our accountabilities, how we do things, how we present to the world.

Achieving that in time for 2017 will require experienced and determined leadership with a broad mandate.

Whatever decisions are made now must be in the best interests of New Zealand to have a strong and vital Labour Party.

The party's interests must come before any personal interests. I have thought carefully before responding to calls to re-offer myself for the leadership of the party.

Consultation with colleagues, members and affiliates has affirmed that the whole party must participate in this choice, and not just one part of it.

Therefore I am announcing today that I will nominate for a primary contest, which will be held across the caucus, the party membership and the affiliates as the party constitution requires.

The process is a matter for the party council, but the work we have begun towards creating a country with opportunities for all New Zealanders must be fast tracked.

I would like to take this moment once again to thank my family and friends, my parliamentary colleagues, my office staff, my electorate committee, staff and volunteers, and the hundreds of thousands of New Zealanders who voted Labour and who believe that Labour is a vital part of New Zealand's future.

It is a privilege to lead the Labour Party. It is a great and a proud party. It has the best interests of all New Zealanders at heart.

It has the values needed to create a fairer and more progressive society. I intend, with the endorsement of the party, to lead Labour to victory in 2017 so that we can implement them.

I am now going to resume, after your questions, a long-booked family holiday until Monday evening and I won't be available for further media comment until then.

Thank you and kia kaha.