Voters in many parts of the North Island were told to expect stormy, wet weather as they headed to the polls in today's election. 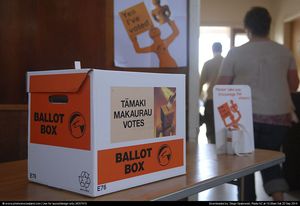 Nearly 3.1 million people, or more than 91 percent of those eligible, have registered to vote. Photo: PHOTO NZ

In the South Island, the weather was fine throughout much of the day but a southerly change was expected to bring showers to Southland, Otago and Canterbury later in the day.

Despite the inclement weather in some areas, the Electoral Commission said that despite the weather polling booths throughout the country reported steady flows of people since they opened this morning.

It said teams were busy fixing the faults, and hope to have power back to all properties by 7.30pm.

The Fire Service says part of a warehouse roof has been blown off in Whanganui.

The Electoral Commission said more people had registered to vote in today's election than at the last one in 2011.