A failed National Party candidate has urged the party to weed out rogue elements as National continues to try to shrug off adverse publicity arising from the book Dirty Politics. 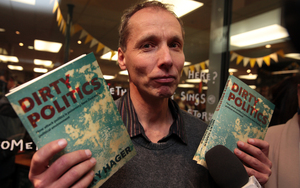 Brent Robinson failed in his bid to win the candidacy for the safe National seat of Rodney three years ago after he was subjected to attacks on Cameron Slater's Whale Oil blog.

Mr Mitchell is now the MP for Rodney.

Mr Robinson said it was only later that he realised the extent of the campaign on Mr Mitchell's behalf.

"We've talked about it, we've openly discussed it and I expressed to him my disappointment and disgust in what took place in the process, so for Mark now to say that he didn't engage these people, that he didn't pay these people I just find absolutely mind-blowing."

Mr Mitchell said he did not pay either Mr Lusk or Mr Slater to help his campaign. He said he was surprised by Mr Robinson's comments because he had never discussed the matter with him.

Meanwhile, Mr Robinson, who is still a party member, said National has problems and there was a rogue element that had grown within the party that needed to be weeded out.