Prime Minister John Key has declined to apologise to the mother of a man targeted by blogger Cameron Slater after the 26-year-old's death earlier this year.

Ms Hall's son Judd died when the car he was a passenger in crashed during a police chase in January. She had previously lost another son in the Pike River mining tragedy. 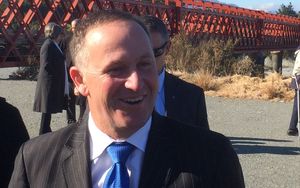 Days after the death of Judd Hall, right-wing blogger Cameron Slater described the man on his website as a feral whose death did the world a favour.

Ms Hall said she does have a beef with the Prime Minister because of his contact with Mr Slater. She told Radio New Zealand's Morning Report programme that John Key should apologise for his links with Mr Slater when during his visit to the West Coast.

During a visit to Greymouth today, Mr Key was asked whether he was going to apologise to her.

"Well what I'd say is - and what I've always said - is it's absolutely not true that I've made any disparaging comments. The only comment I ever made was I recognised her."

Friend 'could have hacked blog'

Cameron Slater's blog was subsequently hacked and his emails and Facebook messages were leaked to investigative writer Nicky Hager, who published them in his book Dirty Politics two weeks ago.

Jo Hall said it was possible that a friend of her son was responsible for the hacking.

"Yes I do think there could be truth behind it. I also think that Cameron Slater wouldn't have only made me as an enemy.

"Judd worked in the IT world - he loved the IT world, that's why he was training in it - because it was one thing he was good at. And he had some very good friends."