Prime Minister John Key's opponents have complained that he broke the rules during a meeting in his Helensville electorate on Monday night.

Mr Key's sole debate in his Helensville electorate attracted hundreds of Aucklanders last night hoping for a fiery electorate debate, but it was very orderly, with few interjections.

Opposition politicians said Mr Key should have been ejected for bringing other parties and candidates into his answers - a direct violation of the rules. 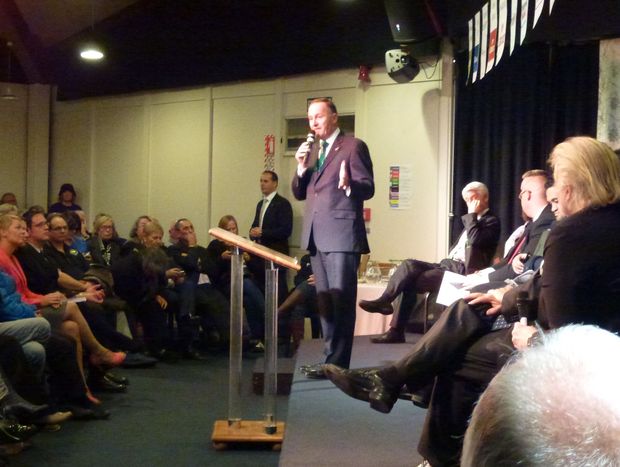 The meeting was held at the Kumeu Baptist Church and organised by local commity groups. Twelve candidates took part, all of whom were standing in Helensville or Te Tai Tokerau. It's the only meeting of its kind that Mr Key will take part in his electorate during the campaign.

More than 400 people crowded into the church, with questions ranging from poverty to transport to local electorate issues.

A Radio New Zealand reporter at the meeting said it was very orderly, with few interjections. However, about 200 people protested outside, chanting loudly and at times threatening to drown out the candidates.

When he spoke, John Key came close to being warned for bringing another party into his answer about the super age.

The National Party leader won more than 60 percent of the Helensville electorate votes at the 2011 election and was greeted by both applause and boos when he arrived.

Others to attend included Internet Mana leader Laila Harre and Hone Harawira, the MP for Te Tai Tokerau and Kennedy Graham from the Green Party.

Mr Harawira was one of those not impressed by the way organiser Holly Ryan chaired the meeting and said Mr Key should have been ejected.

"She let him get away with far more than she'd tolerate from anybody else on numerous occasions. But still, I guess we got the opportunity to speak and that was the important thing." 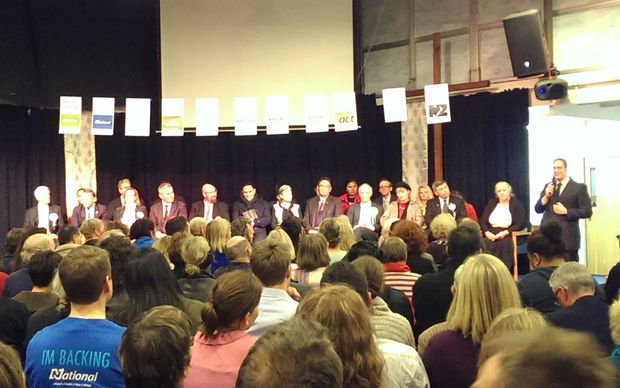 Candidates were at times drowned out as protesters chanted outside the church. Photo: RNZ / Demelza Leslie