The Internet Party is denying any involvement with a video posted online that features a burning effigy of Prime Minister John Key.

During a television interview on Monday morning, Mr Key said Internet Mana put the video together and posted it on their website. 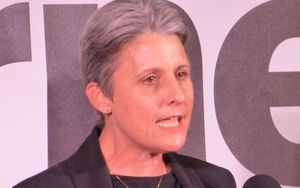 Internet Party leader Laila Harre says no one in the party, or connected to it, is responsible in any way for creating or promoting the video.

Mr Key said he was talking more broadly about another video in which there was expletive-laden chant about him at an Internet Party event, and there was a similar chant in the effigy video.

But Ms Harre told Radio New Zealand's Checkpoint programme on Monday that the video has no connection with her party and its makers have confirmed that.

"The Prime Minister made a completely untrue statement on Television New Zealand this morning. He has not withdrawn that statement."

Ms Harre said she believes the attempt to link video to her party is deliberate.

She is demanding that John Key apologise.