Labour Party leader David Cunliffe says the Internet-Mana alliance will not be part of a Labour-led Government.

In the past, Mr Cunliffe has said it would be highly unlikely that Internet-Mana MPs would be ministers in a Government that he leads if elected on 20 September. 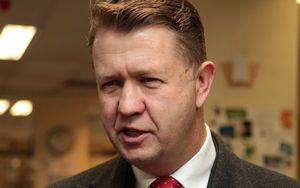 In July, he said that it was extremely unlikely that the leaders of the Mana and Internet parties, Hone Harawira and Laila Harre, would get Cabinet posts under a Government he led.

He then said it would be highly unlikely that any Internet Mana MPs would be in a Labour-led executive, either in or outside the Cabinet.

On Tuesday he took that a step further, saying Internet-Mana would not be part of a Government that he leads. However, that still leaves the door open to a confidence and supply agreement.

Mr Cunliffe was asked whether he agreed with one of his candidate's criticisms of Internet Party founder and entrepreneur Kim Dotcom.

"Look, we don't hold a candle for Kim Dotcom. Kim Dotcom has been a donor to ACT candidates in the past, he's not associated with the Labour Party, and I've made clear that there won't be Internet-Mana in a Government that I lead."

David Cunliffe said a dispute in the Te Tai Tokerau electorate between its candidate, Kelvin Davis, and the Internet Mana party is understandable, but doesn't fit its campaigning.

On Monday night, TV3 reported emails containing plans by Mr Davis' campaign team for a website against Internet Mana, which would have included criticising Kim Dotcom as a fake.

But the Labour Party's head office has asked Mr Davis' team to stop the campaign.

Mr Cunliffe said he understood a local candidate venting a few frustrations. He said Labour's head office had given guidance to the Te Tai Tokerau campaign team to keep to Labour's 'Vote Positive' slogan for the election campaign.