The Internet Mana roadshow rolled into the capital on Monday promising change and pulling no punches, with even the Labour Party in its sights.

Close to 300 people turned out for the event in central Wellington - a turnout noted by Mana's leader Hone Harawira, who couldn't resist a jab at Labour. 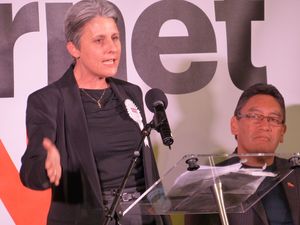 "I won't mention the party, but a big party that's in opposition at the moment launched their living wage policy the other week and had twenty people turn up."

The two parties have an increasingly tense relationship.

Labour has left open the door to working with Internet Mana, but Labour leader David Cunliffe says it's unlikely it would form part of a formal coalition.

Other Labour MPs have openly criticised the way the Internet Party is trying to enter Parliament through Hone Harawira's Te Tai Tokerau electorate.

In a message aimed at Labour, she said that while party was not going to support a National government, it would not support Labour to sign a Trans-Pacific Partnership trade deal. 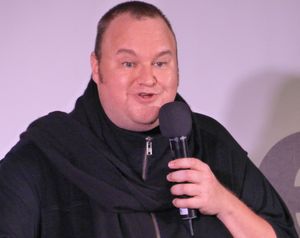 One audience member asked Internet Party founder Kim Dotcom to explain his donation to former ACT leader John Banks during his campaign for the Auckland mayoralty.

Mr Dotcom said that was completely different to his support for Internet Mana.

"Back then when I did the John Banks donation I was probably selfish and almost thinking of myself - how he and his contact network can help me to meet other entrepreneurs and to further my business," he told the meeting. "This is donation (to Internet Mana) - there's nothing in return other than making this country better."

Mana's newest candidate, former Labour MP Georgina Beyer, told the audience how she spent much of the past seven years unemployed.

When she finally did get a job, she said, the 90-day trial period got her sacked, and she promised that if she was in Parliament it would go.

Ms Beyer had strong words for her former party, accusing Labour of paying only lip service to Maori.

Many of the mostly young audience expressed disillusionment with other parties in Parliament, including the Greens. The roadshow was heading to Nelson on Tuesday and Christchurch on Thursday.