The Prime Minister is continuing to stand by Transport Minister Gerry Brownlee, even though he is being investigated over a breach of airport security.

John Key has downplayed the seriousness of the security breach committed by Mr Brownlee when he took a short-cut through an exit door as he was running late to catch a flight at Christchurch airport on Thursday morning.

The Labour and Green parties have called on Mr Key to stand Mr Brownlee down as Transport Minister while the inquiry is under way. 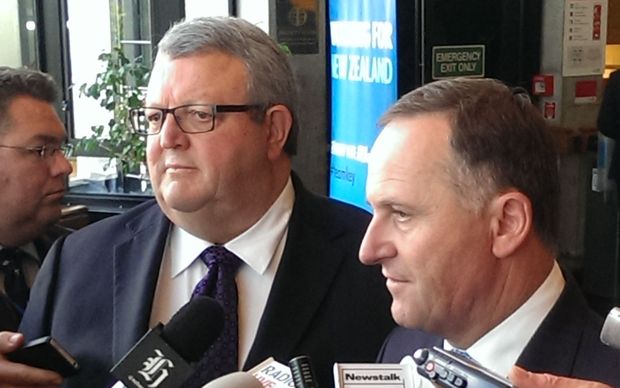 The Civil Aviation Authority (CAA) is looking into the incident, in which Mr Brownlee asked an airport staff member to let him and two staffers through the short-cut, thus avoiding security checks at the airport. They went through an exit door rather than through security - a breach of airport and airline rules.

Mr Brownlee said he did not put any pressure on that staff member to do so. "We knocked on the door and I said to the guy, 'Look, we're in a terrible hurry, can we get through here?' He said okay. In reality, I should never have done that . It's not that guy's fault - I'm the one to blame here."

On Thursday, Mr Brownlee offered his resignation over what he described as a thoughtless incident - but only after aviation security officials contacted him to ask it.

However, Prime Minister John Key rejected the offer. He also rejected the Green Party's assertion that Mr Brownlee's actions were a reflection of the growing arrogance of National Government ministers and MPs.

But Greens' co-leader Russel Norman compared the incident with Mr Brownlee to the behaviour of disgraced former National list MP Aaron Gilmore, who resigned from Parliament in May 2013 amid widespread criticism of his behaviour to staff at a Hanmer Springs hotel.

"It is exactly the same thing as what Aaron Gilmore did when he said, 'Do you know who I am?'. That's what he was doing when he was knocking on that door - he was saying non-verbally you know who I am, I get to break the rules, I'm the minister."

Labour Party leader David Cunliffe said the focus of the investigation should be on Mr Brownlee - not on the staff member who opened the door for him.

The piece of law Gerry Brownlee and his two staff may have breached is the Civil Aviation Act, under which a person can be charged with trespass if found in a security area without the proper authorisation. The offence carries a maximum penalty of three months' jail or a $2000 fine.

CAA director Graeme Harris said in a statement on Friday the primary focus of its investigation would be to determine the facts of the incident and take action to prevent something like this happening again.

"It raises some questions about how the role that people with influence may have in shortcutting our aviation security systems. So it may well be worth looking at the wider issues here and not just the narrow legal one, to see what the outcomes should be."

The CAA would not say who it was that let Gerry Brownlee through the exit only door on Thursday morning, but said it was not an Aviation Security Service employee.

Aviation commentator Peter Clark said it was this person who should be in trouble, rather than the minister. "Nobody should have been allowed through the exit lane. It should have been barred and whoever was monitoring that should never have allowed anyone through - no matter who it was."

The rules state all passengers on a flight need to be re-screened if some made it through without being checked in case items were handed on to those already on the aircraft, and Mr Clark was not sure why this did not happen.

PM too quick off mark - Labour

Labour transport spokesperson Phil Twyford said John Key had been too quick off the mark in deciding not to accept Mr Brownlee's resignation and should have waited for the outcome of the CAA investigation.

"The Prime Minister did say that he was going to hold National Party ministers to a higher standard of accountability, so I would have hoped that the prime minister would have waited for the facts to be on the table about what regulations Mr Brownlee might have breached."

Mr Twyford said it was important Mr Brownlee was held to account, and pointed to the prosecution of John Banks when he was Police Minister for using his cellphone during a flight.

"Well I think it's very important, for the public, that politicians are seen not just to make the laws but to follow them, as well, and that's a pretty fundamental principle of our democracy."