New Zealand First leader Winston Peters says he may have a tilt at the East Coast Bays electorate if National does a deal with the Conservatives.

Mr Peters said he could contest the seat in September's election if the National Party does a deal with the Conservative Party. 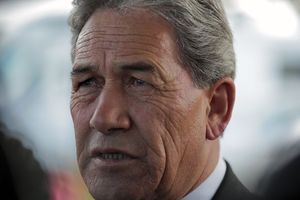 East Coast Bays is held by National's Murray McCully, but the Conservative leader, Colin Craig said he expects National to stand aside for him.

"The machinations and scheming and plotting of some parties may well come totally undone if they carry on that way .... we'll make that decision at some future date," Mr Peters said.

He said if he were to stand against Colin Craig, it would hardly be a head to head contest.

"We're experienced, we're qualified, we know what we're doing and we've got a record of winning. What's theirs? Lost every campaign they've been in.

"But let's not waste any time talking about other political parties at this conference."

Meanwhile, Colin Craig said Mr Peters is playing games by hinting he might throw his hat into the East Coast Bays race.

He said if Mr McCully stepped aside, he would win the seat over Mr Peters.

"I don't think Winston Peters would get anywhere near what I'd get."

He listed the polling he has putting Mr McCully at 30 percent, himself at 15 percent, and 40 percent of voters undecided. 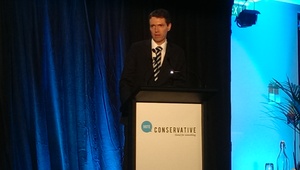 Mr Craig said the Conservative Party was closing in on New Zealand First, and pulling a lot of support from Greypower.

Mr Craig also outlined his election bottom line at the Conservatives' conference in Auckland this afternoon.

He said he would not form a coalition with a National-led government without a deal to make referendums binding on two-thirds of the vote.

Mr Craig said the Conservatives would rather sit on the cross benches than go into a coalition or confidence and supply agreement if that bottom line couldn't be met.