The Green Party has accused the Prime Minister of taking a "softly-softly" approach towards the Japanese, which will only embolden their whaling efforts, it believes.

The International Court of Justice ruled in March that Japan's whaling programme was illegal. 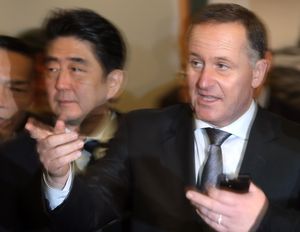 Mr Key said Mr Abe told him Japan is exploring ways to resume whaling within the parameters of the court's ruling. He said he stressed that New Zealand was opposed to whaling of any kind.

But the Green Party said Mr Key has done the "absolute bare minimum" to express New Zealanders' abhorrence at the slaughter of whales.

MP Gareth Hughes said Mr Key should've threatened to use all diplomatic options, including trade sanctions, if Japan persists with whaling. He said Mr Key's approach will embolden Japanese whalers in their efforts to find another legal loop-hole.

"Here we have the Prime Minister of a whaling nation coming down to one of the most staunchly pro-whale-conservation countries and he came away essentially with a slap on the wrist with a wet bus ticket."

Mr Key said New Zealand will wait to see what Japan does first before deciding what, if any, action to take. He said there may be little the Government can do to stop Japan resuming some form of whaling.

"If they were undertaking whaling that was truly scientific as defined by the International Court of Justice, then we might be limited in what we can do, but they would have to meet that criteria and we'd need to review what their programme looks like."

Mr Abe flew from Christchurch to Canberra on Monday afternoon and would meet with Australian Prime Minister Tony Abbott and address a joint session of Australia's Parliament on Tuesday.