The Labour Party has promised to run a clean election campaign, free of dirty tricks, smear campaigns and what it called a personality cult.

The party held its election-year congress over the weekend and unveiled its campaign plans - focused firmly on positivity, not on the party's leadership.

Labour leader David Cunliffe's speech was well-delivered and well-received. He talked about his vision for New Zealand and the campaign.

"This election campaign should not be about dirty tricks or dodgy deals, smear campaigns or even a personality cult," he said. 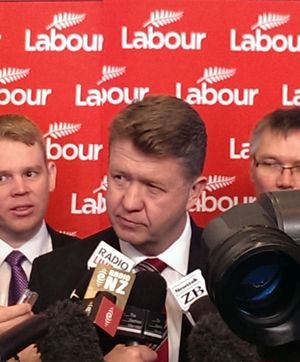 David Cunliffe speaking to the media after his speech. Photo: RNZ / Demelza Leslie

Mr Cunliffe's reference to a personality cult was a direct swipe at the National Party's campaign slogan Team Key - which is centred around its leader, Prime Minister, John Key.

Labour's campaign slogan was released on Sunday - it will be Vote Positive, accompanied by a social media hashtag #forabetternz

He said he was convinced that Labour can win the election because it was offering the best deal.

However, the polls do not back up his optimism.

Labour said its 'turnout machine' will kick into action 17 days out from election day, and it believed that will add two to three percent to its polling.

It also said that National on average dropped about six percent during the election campaign.

Party faithful at the congress said morale within Labour was very high and its policies were spot on.