The Australian Labor Party leader, Bill Shorten, says red tape should be reduced in Australia so New Zealanders can live there more easily. 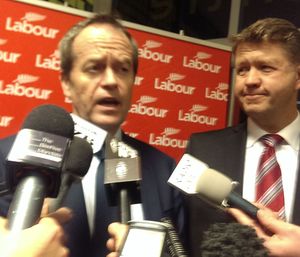 About 300,000 New Zealanders live across the Tasman on special category visas - this means they pay taxes but don't get access to benefits of permanent residency such as disability care, welfare and social housing.

The initial restrictions were brought in under a joint agreement between Australia's Liberal government and Helen Clark's Labour government in 2001.

Earlier this year, protesters complained that that many New Zealanders can't get permanent residency or citizenship across the Tasman because their occupations don't feature on Australia's wanted-skills list.

Mr Shorten is due to address the New Zealand Labour Party's election-year congress in Wellington.

He said yesterday it's a huge advantage to Australia that so many New Zealanders choose to live and work in his country.

Mr Shorten says Australia needs to ensure that where there are bureaucratic red tape problems that both countries work together to eliminate them in the best interest of people on both sides of the Tasman.