Labour MP Trevor Mallard's idea of resurrecting the extinct moa to lift his Hutt South electorate's fortunes has been shot down by MPs on all sides of the House, including his leader.

David Cunliffe says the moa is not a goer, though in Parliament on Tuesday afternoon other MPs called it inspired, brilliant but also laughable. 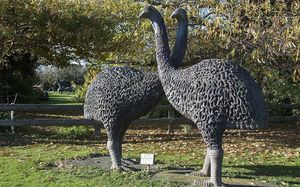 Mr Mallard said he's serious about the campaign to resurrect the flightless bird and reintroduce it to his electorate. He floated the idea in a speech to business group Development Wainuiomata.

The MP said the science to recreate the moa is already happening, though it might be at least 50 years until it becomes a reality. He admitted the idea is a bit Jurassic Park, but said it would make the Wainuiomata area a real scientific and tourism centre.

"I only want the small moa in Wainuiomata, I don't want those that are 240kg and 3.5 metres tall. I'd like ones which I could pat on the head."

Prime Minister John Key, however, could hardly contain himself: "Well it's good to see Labour are focused on the issues that really matter."

While questioning the idea's feasibility, Mr Key suggested there may be some moas "hanging around" the Labour Party caucus.

"It's a loopy idea - it's pretty desperate, it just shows the sort of mess that's now in Labour's ranks. If there's any endangered species to be concerned about, I think they should be concerned about their own caucus colleagues."