The National Party's campaign chairperson has dismissed concerns National voters do not want the party to do an electorate deal with Colin Craig's Conservative Party. 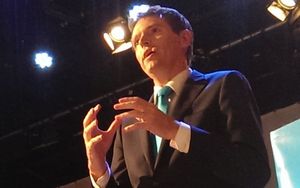 But Steven Joyce said not much can be read into the poll results.

"Some people that would who answered that question just don't like MMP and don't want to see deals with anybody."

Mr Joyce said the level of preference was not known and the reality with MMP the coalition partners are necessary.

At the annual National Party conference on Saturday John Key said he would announce whether or not the National Party would do a deal with the Conservatives in the next few weeks.

Under any deal, National would have to tell its supporters to vote for Mr Craig as the electorate MP, to ensure the Conservatives secured a place in Parliament.

Mr Key said it was possible that people who might think Colin Craig and his views were flaky, would still vote for him, if it meant keeping a National government in place.