New Zealand's Parliament has condemned the imprisonment of Australian journalist Peter Greste and two of his Al Jazeera colleagues in Egypt.

MPs unanimously passed a motion in the House on Tuesday in support of the three journalists, calling for their immediate release.

Peter Greste, Canadian-Egyptian national Mohamed Fahmy - the bureau chief of Al Jazeera English - and Egyptian producer Baher Mohamed have been sentenced to seven years in prison. Baher Mohamed was given an extra three years for possessing a single bullet. 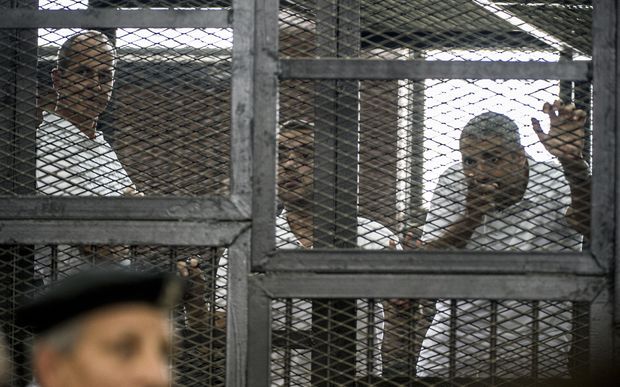 The court found them guilty on charges including helping a terrorist organisation - namely the now banned Muslim Brotherhood - by publishing lies. They had all denied the charges.

New Zealand's Foreign Affairs Minister Murray McCully said press freedom and transparent judicial processes are fundamental to any democracy and the jail terms imposed appear to be aimed at silencing critics rather than serving justice.

Mr McCully said Egyptian authorities need to understand that the international community is watching closely and will not accept the verdicts.

He said there is nothing to suggest that the journalists were doing anything other than their job, and authorities should review their case as a matter of urgency.

The Egyptian government has so far defended the convictions and rejected the widespread condemnation of them as interference in its internal affairs. President Abdel Fattah al-Sisi said on Tuesday that the independence of the judiciary must be respected and he will not interfere with the verdicts.

The ambassador to New Zealand, Mahmoud Zayed, said he can understand the backlash against his country.

Mr Zayed told Radio New Zealand's Checkpoint programme on Tuesday he can't comment on the specifics of the case, but does recognise the distress the verdict has caused. He said the thing to do is to focus on the appeals process and hope for the best.

A New Zealand union representing journalists is calling on the Egyptian government to free the Al Jazeera trio immediately.

The Engineering, Printing and Manufacturing Union, which has about 700 journalist members, on Tuesday condemned the prosecution and imprisonment. An organiser, Joe Gallagher, said they are a serious threat to the freedom of the press, and all journalists must be free to report the news impartially and without fear of persecution.

The White House described the sentences as a blow to democratic progress in Egypt and called for the release of the journalists.

The Australian government said it was appalled by the sentencing of Mr Greste and his family said it would lodge an appeal. It has summoned a senior Egyptian diplomat to protest against the sentence.