The number of labour inspectorates and immigration officers in Christchurch rebuild is being boosted in a move to stamp out the exploitation of migrant workers, the Government says. 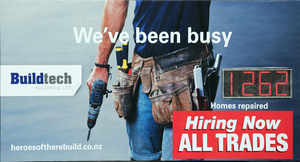 During the next four years, $7 million will be used to pay extra officers, including three compliance officers and two investigators.

"Ten inspectors there on the ground in Canterbury, making sure that employment standards are adhered to, that there are more investigations and, in the worst cases ... more cases taken to court."

An employment standards audit programme for businesses working within the rebuild, such as construction and labour hire firms, would also be rolled out, Mr Bridges said.

Migrant exploitation in the rebuild was a growing problem but migrants had the same employment rights and protections as all other workers in New Zealand, he said.

"It's often a profiteering opportunity for people based on exploiting immigrants' lack of knowledge about the true opportunities or the challenges they are going to face, and so there can be a lot of misrepresentation and a lot of people making money out of that process," Mr Mukorimbindo said.

The move came at a good time because the high number of people needed for the rebuild had not yet arrived, he said.