Green Party MP Jan Logie has offered to personally apologise to Finance Minister Bill English for a tweet she made last week about the Budget. 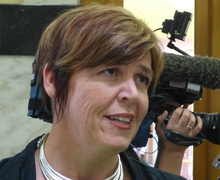 In the tweet, Ms Logie used an expletive while referring to Mr English's six children and his six Budgets.

Mr English said he was not offended, but that it revealed the nasty side to the Greens.

Jan Logie said she regretted the tweet. "It was a play on words at the time and a reference to the treatment of the poor, but I know there've been multiple readings and I'm really mortified about those."

Ms Logie has already said sorry on Twitter, but said she was happy to directly apologise to Mr English.

The Speaker of the House says the use of social media to cover parliamentary proceedings needs further examination and has referred it to the Privileges Committee.

David Carter said there were clear rules for the coverage of Parliament and for members, but there was still uncertainty about how they applied to social media.

Mr Carter said the issue was a significant one because the long-standing and carefully nuanced rules of Parliament didn't sit comfortably with the informal and instant nature of Twitter.

He said tweets could be actionable, or MPs could be found in contempt by the House by publishing a false or mis-leading account of what was happening in the chamber.

His ruling follows tweets last week critical of his performance in the House, and the tweet by Green MP Jan Logie.

Mr Carter said he didn't receive any complaints about specific tweets that prompted him to look at the matter, but the level of twitter use by MPs was such that it could not be ignored.