The business community has labelled the 2014 Budget as solid and generous, while unions say it won't lift wages.

Finance Minister Bill English, announcing the Budget on Thursday, said the Government was picking a higher-than-expected surplus in the coming financial year after running six consecutive years of deficits. 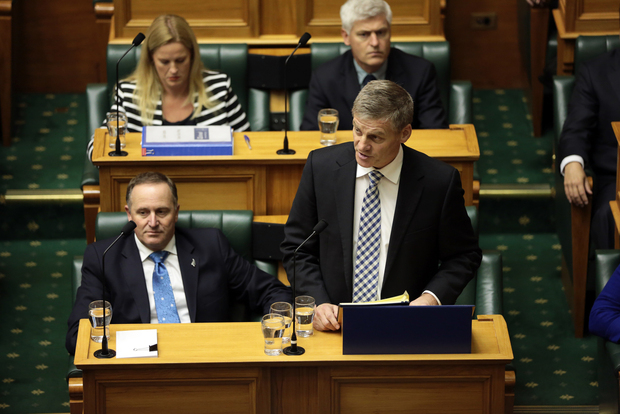 The centrepiece of Mr English's sixth budget was a $493 million package aimed at families, which will extend paid parental leave to 18 weeks by 2016, provide free doctors visits and prescriptions to children under 13, and increase the amount received under the parental tax credit.

"Returning to surplus … only a short time after the global financial crisis and Christchurch earthquakes is a sound achievement," said Mr OReilly.

Efforts to allow the expensing of research and development had also been welcomed, though the chief executive of Auckland's Employers and Manufacturers Association, Kim Campbell, said more could be done.

"These long overdue measures on their own could well result in a highly desirable pick-up in private sector investment in R&D and innovation." Mr Campbell said.

He said $500 million over four years to help families would help stimulate the economy and boost business, though he also sounded a warning. "We wouldn't want the surplus spent before it has been banked." Mr Campbell said.

Economic growth is forecast to peak at 4 percent in the March 2105 year before easing back to 3 percent the year after, and 2 percent by 2018.

But the Council of Trade Unions' economist Dr Bill Rosenberg was doubtful about the forecasts.

"Treasury has a record of overestimating wage increases when they are rising as slowly as they have been over the last five years." Dr Rosenberg said.

He said the budget was a lost opportunity to reward workers who had not received their fair share of the stronger economy. "This Budget … does nothing to grow wages. National is fixated on getting to surplus." Dr Rosenberg said.

Mr English signaled there was scope for modest tax reductions if the forecast budget surpluses came to pass.

Business groups embraced the prospect of lower taxes. "The reduction in core government spending from 35 percent of GDP in 2010 to 31 percent this year is welcome, and will help pave the way for possible tax cuts." Mr O'Reilly said.

Unions said the Government was irresponsible for talking about the prospect of tax cuts. Dr Rosenberg said spending on health and education had fallen in real terms, and the Government should be addressing that directly through higher spending.

The Government will lift new spending from $1 billion this year to $1.5 billon next year, and then by 2 percent a year.

Despite increased allowances, government consumption, which also includes taxation and borrowing, will fall as a share of total demand in the economy, meaning the fiscal impulse or stimulus from the budget continues its contractionary trend.