Prime Minister John Key has rejected suggestions he should sack Justice Minister Judith Collins, saying she has his full confidence. 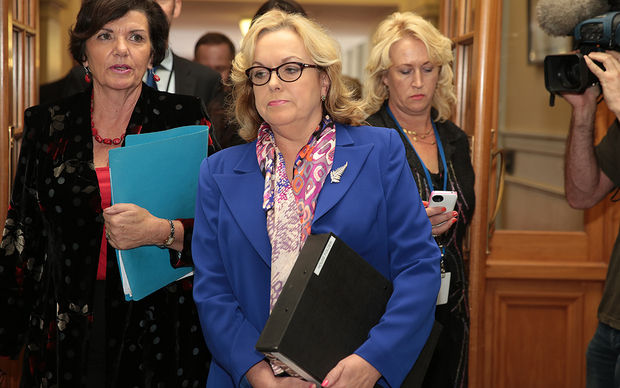 The Opposition left Ms Collins alone during Parliament's Time on what was her last day before taking stress leave.

But Labour Party leader David Cunliffe asked Mr Key why he would not sack Ms Collins over her involvement with export company Oravida during her official visit to China last October.

Her husband, David Wong-Tung, is a director of Oravida, and owner Stone Shi and managing director Julia Xu are close friends. Emails released by the Ministry of Foreign Affairs and Trade last Friday revealed Ms Collins' office had lobbied the ministry to include Mr Shi and Ms Xu in official engagements.

The office also arranged for Ms Collins to visit Oravida's offices in Shanghai and initially asked for an official briefing from the ministry on a dinner the minister had with Mr Shi, Ms Xu and a senior Chinese border control official in Beijing.

Mr Key concedes Ms Collins did allow a perception of conflict of interest to arise.

But he told Mr Cunliffe in Parliament that far from sacking the minister, she enjoyed his full confidence and had done an outstanding job.

Labour MP Grant Robertson asked Mr Key whether the Ministry of Foreign Affairs and Trade had briefed the Cabinet Office when it was assessing whether Ms Collins had a conflict of interest over her involvement in Oravida.

Mr Key said he believed so but could not be sure.

Mr Robertson then asked whether the Cabinet Office got all the emails released by the Ministry of Foreign Affairs and Trade last Friday, including those which revealed the programme had been changed so Ms Collins could visit Oravida's offices in Shanghai.

Mr Key replied: "It was provided with all the information that would have been relevant. The fact that a programme changes is of absolutely no relevance whatsoever.

"But what is interesting ... is this. The paper work actually shows that right through this that not only did the minister have a very busy programme, which the member wants to gloss over, all on judicial and justice issues, but secondly all the way through it talks about a private dinner."

However, the initial emails do not refer to the dinner on the Sunday Ms Collins arrived in Beijing as a private one, even though Mr Key continues to claim they do. The dinner only starts being referred to as a private one after New Zealand diplomats raise concerns about it.

Ms Collins said Mr Mallard was plucking figures out of thin air, with his comments that her family had received $500,000 as a result.

But Mr Mallard said he was alluding to the five Oravida directorships her husband had held for about two years and that he had been advised each directorship would be worth about $50,000 a year.

Mr Mallard said, therefore, Ms Collins should be even more careful about any potential conflicts of interest.

Ms Collins is taking a short break from Parliament but the Labour Party has promised to have more questions for her when she returns.