The Defence Force is to receive $100 million of new money in next month's Budget. 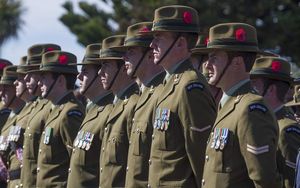 Military funding has not increased since 2010, and over the past four years there have been $204 million worth of savings.

In 2010, the Government had told the Defence Force to reduce costs by up to $400 million so more money could be moved into frontline operations. It has since backed off that demand in recognition of the adverse impact that was having on morale, retention of personnel and the ability of the Defence Force to fulfil its basic duties.

This year's funding boost is the first stage of $535.5 million of extra funding for Defence over the next four years.

Dr Coleman said the new funding was not an acknowledgement that approach was flawed. "My concern was that we didn't push Defence too hard and too fast because in the end we need them to be able to deliver what the Government intends them to."

The minister said the Government would soon be awarding the contracts for a new battle training facility for the SAS and a systems upgrade for the navy frigates, and a decision will also be taken on a replacement for the navy tanker Endeavour.

But the Labour Party says the Government is now scrambling to repair the damage done because of its drive to find hundreds of millions of dollars in savings within the Defence Force.