The Ministry of Health says it expects to have legal high regulations in place from July this year.

The Government has announced it will ban the drugs until they are proven to be safe.

Forty-one synthetic cannabis products have interim approval for sale, while the Government sets up a testing and regulatory regime for psychoactive substances, under legislation introduced last year.

The Ministry of Health says once the regulations are in place, legal high manufacturers will have to go through a full testing and approval process, before they can sell their product.

The ministry anticipates this approval process could take 18-24 months and cost the manufacturer $1-2 million.

and cost the manufacturer up to $2 million.

The associate health minister, Mr Dunne, has announced all products will be banned within two weeks until they can be proven low-risk, after acknowledging laws introduced last year hadn't gone far enough.

New Zealand First says Peter Dunne should be sacked for not doing something sooner. But Mr Key said it is not a sackable offence.

Mr Key said that, in hindsight, the Government should have taken an ultra conservative view last year and not given any legal high substances a waiver.

And he said the Labour Party forced his Government's hand over announcing a new ban on synthetic drugs, which will take effect on 8 May.

The Government's new ban was announced late on Sunday after the Labour Party said it would announce on Monday its own plan to immediately stop the sale of synthetic cannabis and other psychoactive substances.

Mr Key said his cabinet decided last Tuesday on a ban but wanted to keep quiet about it to cut down on stockpiling by consumers.

He said the Labour Party has not affected the Government's policies on synthetic drugs but forced its hand in terms of the announcement. 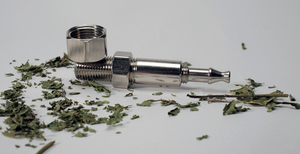 The Government's unexpected Sunday night announcement - that all such substances will be removed from shelves until they can be proven low-risk - followed Labour's statement that its policy on legal highs would be announced in South Auckland on Monday.

The Labour announcement had, in turn, been brought forward a day after New Zealand First issued a press release on Sunday afternoon calling for an outright ban.

He said it's been on the table for weeks and was confirmed by Cabinet ministers last Tuesday.

Mr Dunne said he had kept the decision quiet to give people less time to stockpile the products before they were banned, and any sudden binge-buying was the fault of opposition parties.

Legislation passed last year clamped down on the sale of synthetic cannabis and party pills, but left about 40 products still on sale.

The Government will rush through the law change under urgency on 8 May.

Some people behind the campaign against legal highs said withdrawing them from sale will push addicts towards the black market for illicit drugs.

Julie King, who helped organise protests nation-wide against legal highs, said she had no doubt users would start buying drugs from people who manufacture products in their homes.

And the Drug Foundation said the Government would have less control over legal highs when they were withdrawn from sale.

The foundation's executive director Ross Bell said that would push the products into the black market, while keeping them in shops would allow some control.

Mr Bell said the Government needed to take a measured, rational response to the legal highs problem but it appeared petty politics had come into play.

The synthetic drugs could one day return to the shelves if approved as low risk by a testing regime being developed by the Government.

Intensity of symptoms a concern

A scientist is warning psychiatric and addiction services need to prepare for an influx of people dealing with withdrawal from legal highs.

Dr Leo Schep, toxicologist at the National Poisons Centre, told Nine to Noon, that he welcomed the Government's announcement.

Dr Schep said it was the intensity and duration of symptoms during withdrawal from synthetic drugs that worried him.

Mr Dunne won't give any indication of when that regime might be in place.

A legal high lobby group believes the industry will keep going, despite an about-turn by the Government.

A spokesperson from the Star Trust, Grant Hall, told Morning Report the announcement came as a complete surprise.

He said the legal high industry was not finished and would survive.

The Prime Minister, John Key, says he wouldn't feel comfortable extending animal testing for so-called legal highs from rodents, as used at the moment, to other animals such as rabbits.

The drugs may be sold again if they are proven to be low-risk, by an as-yet undeveloped testing regime.

Mr Key says the Government has been told that testing only on rodents may not be effective, and it may need to be done on rabbits instead.

The Labour Party says it remains opposed to any animal testing in order for manufacturers of synthetic cannabis and party pills to prove their products are safe for sale.

Labour's leader, David Cunliffe, says his party is against animals being used in this way, and believes testing can be done using other technology.

The Government will also be looking at whether the proper processes during manufacturing are being followed.