Prime Minister John Key says no one broke Shane Jones' arm to convince him to take up a job with the Foreign Affairs Ministry, and he obviously thinks it is a better option than what he's doing at the moment.

The Labour Party MP confirmed his departure from politics on Tuesday and is tipped to take up a role helping Pacific islands make more money out of their fisheries. He is likely to leave Parliament shortly and his place will be taken by the next person on Labour's list, Kelvin Davis. 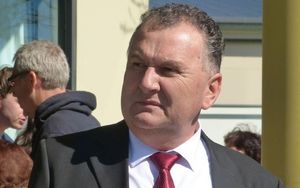 Shane Jones told Radio New Zealand's Morning Report programme he was leaving politics because he does not have the necessary level of commitment and energy ahead of the general election.

He unsuccessfully sought the Labour leadership last year and was asked by the party leadership to tone down attacks he had been making on one of Labour's potential allies, the Green Party.

"Any New Zealander with a smidgeon of interest in politics will know that the political collar has chafed this dog's neck - and now I've slipped the collar," he said on Wednesday.

Labour leader David Cunliffe told the programme the departure says more about the job offer than the MP's view of Labour's chances in the 20 September election.

"I totally respect Shane's right to make a personal decision but we're all surprised by the timing. Obviously the National Party's provided him with a big enough incentive to, in the end, make that particular decision attractive. I don't think it's got anything to do with the state of the Labour Party."

He said creating a new overseas job for a senior Labour MP was a "hell of a way" for National to win an election. "I guess at some point they're going to run out of embassies for all the opposition MPs. You can certainly see the hand of (Foreign Affairs Minister) Murray McCully on that."

Mr McCully offered Mr Jones the position and said it has nothing to do with politics and all to do with improving revenue in the Pacific. He believed Mr Jones was the right man for the role.

He said he first approached the Labour MP about the ambassador job in January this year, and Prime Minister John Key has known about it for some weeks.

On Wednesday, Mr Key said the decision to leave Labour was totally up to Mr Jones. "You can't break people's arms - people only take up a new opportunity because they think the new opportunity is better than the existing one."

Mr Key believed Mr Jones would do a good job but couldn't resist a dig at Labour, saying he would be a welcome addition to the National Government.

On Nine to Noon, Shane Jones said the election result would be tight, but that had nothing to do with him other than his single vote. "I don't really think it's reasonable to pin on me the hopes or anxieties of Labour," he said. Nor did he think it was fair to link everything to leader David Cunliffe.

Shane Jones is yet to officially accept the Government's offer of an ambassador-level role. The position would involve helping small Pacific island nations in particular maximise their earnings from their fisheries.

It would be appointed through the Ministry of Foreign Affairs and would be likely to involve diplomatic accreditation with some of the nations.

The Government uses an example of the Pacific tuna fishery which last year was worth $4.9 billion at market, while Pacific islands received only $300 million of that.

Mr Jones chaired the Treaty of Waitangi's Fisheries Commission, Te Ohu Kai Moana, from 2000 to 2004. His task at the commission was to get agreement from about 70 iwi on how to divide up fisheries assets resulting from the Maori Fisheries Settlement deal. That was completed in 2004 when the relevant legislation was passed.

It is understood the Government has been pushing to have someone appointed before the Third International Conference on Small Island Developing States being held in Samoa in September, which seeks to boost sustainable development in specific Pacific countries.

A senior figure in the fishing industry said on Wednesday that he imagine anyone better than Shane Jones to help Pacific Island nations develop their fisheries.

Charles Hufflett, a former president of the Pacific Islands Tuna Industry Association, told Radio New Zealand's Checkpoint programme the position should have been created 20 years ago and is pleased Mr Jones has been offered the role.

"Can you imagine anybody else better? I can't. We've let other nations get involved, the whole demographics of the Pacific fisheries have changed in those 20 years. Now at last perhaps we'll go more towards fisheries and more towards what island states can actually do."

Kelvin Davis said the news came as a complete surprise and he had to be picked up off the floor when he was told of his imminent return to Parliament.

He said like Mr Jones, he also brings an affinity with the average New Zealand male, but wants to enter politics so he can make a stand in Parliament on reducing violence against women.

Mr Davis has unsuccessfully contested the Te Tai Tokerau electorate three times and has been selected to stand in the electorate in the September election.

Former Labour politician Dover Samuels said the party needs to make some major changes after Mr Jones goes if it wants to be successful.

"He had the ability to argue (the) ordinary New Zealander's case. But if you've got a caucus that's really not listening to some of the basic issues that he's raised, then any political party would have a major problem in terms of achieving the Treasury benches."