The Justice Minister continues to face questions about whether she gave a New Zealand milk exporting company favourable treatment following her trip to China last year.

Judith Collins on Wednesday again defended her dinner with Oravida executives and a Chinese border official while in Beijing, insisting that she's done nothing wrong. 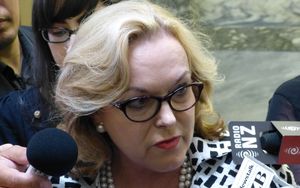 But Opposition parties say the evidence is stacked against her and she must step down.

The minister's husband is director on Oravida's board and she is close friends with two of its senior executives.

It has been revealed that Oravida asked for help from the Government over what it described as "a debacle" around the Fonterra botulism scare last year involving infant formula and problems it was experiencing getting its product into China. It subsequently received money from a government fund for affected companies.

At Parliament on Wednesday, New Zealand First leader Winston Peters pressed Ms Collins over whether she has used her position to help Oravida in the wake of the Fonterra scare.

"Is she telling the House that she has disclosed everything to the Prime Minister's Office and the Prime Minister - because if that is the case, both she and he are involved first in a deep conflict of interest and second, committing in her case and abetting in his case a corrupt action by the minister."

Ms Collins replied: "Well Mr Speaker, that question is so loaded with allegations that are false, so I can't be bothered answering it."

The minister said 41 companies received some funding from the Government because of the Fonterra scare that later proved to be a false alarm.

In an interview with Radio New Zealand's Checkpoint programme later on Wednesday, Ms Collins said she was not aware that Oravida had been affected by the scare and knew nothing about its request for government assistance until Wednesday.

"When I say it wasn't discussed with me, I had nothing to do with it that is exactly correct, and to say otherwise is wrong."

Ms Collins has avoided the media for the past two days, but on Wednesday spoke briefly to reporters waiting at the back way into the House.

Prime Minister John Key said on Wednesday he supports Ms Collins, saying he believed she has disclosed all of the relevant information about her trip to China to him. Mr Key said there is nothing untoward about Oravida receiving government funding following the Fonterra scare.