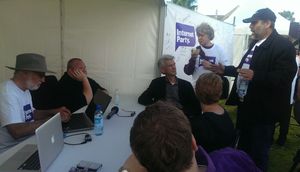 A members-only event at Mr Dotcom's Coatesville property on Sunday was attended by 700 supporters.

As well as revealing the way the party would write policy, the internet businessman told the gathering candidates would be selected by members voting in an open audition process.

He told party members that free education for all will be a key platform, but would not comment on Sunday on his negotiations with the Mana party.

In his speech, he said job creation and small businesses are critical to New Zealand's prosperity, but young people are being crippled by debt because the student loans system was "fatally flawed".

Mr Dotcom said in New Zealand graduates finish studying with a debt that's the size of a mortgage. He said the Government should pay for free education in New Zealand.

Mr Dotcom said the party would create a law that will force local internet providers to look at average pricing around the world and apply it in this country.