Senior Mana party member Sue Bradford says she would find it very difficult to stay in the party if it goes into an alliance with Kim Dotcom's Internet Party.

After late-night deliberations, party members at Mana's AGM in Rotorua voted within eight different rohe (tribal territories) and all groups decided to continue talking with the internet businessman.

Ms Bradford said she cannot support Mr Dotcom and she would find it very difficult to be in an organisation in alliance with someone so clearly promoting a neo-liberal economic agenda.

She said Mana's credibility was at risk.

"The fact that the branch has voted to go forward, well that's their prerogative, but that doesn't mean there aren't a lot of us who resist and think that it's a very dangerous direction that we may go in." 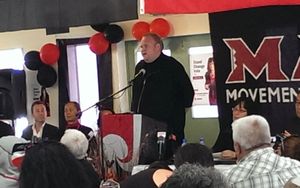 But Ms Bradford dismissed claims she staged a walkout of the party's annual meeting over its decision to continue talks with the Internet Party.

President Annette Sykes said five to 10 people including Ms Bradford left the meeting before the decision to press ahead was made. She said those people either did not want to take the next step, or believe Mana shouldn't develop any relationships before the election.

Ms Bradford said she and her husband left because it was late and they were tired. The veteran activist said dozens of other people at the meeting voiced their opposition to the proposed alliance.

Mr Dotcom had earlier addressed 200 Mana members at the meeting urging them to align with his new party in a bid to bring down the National-led Government.

The German-born New Zealand resident was scathing of the Government's treatment of students and told delegates he wanted to crackdown on the Government Communications Security Bureau.

Mana leader Hone Harawira has backed the idea of aligning with the Internet Party, saying he thinks it could increase Mana's numbers in Parliament.

The party expects further negotiation and consultation to take place over the next month, after which a final decision on a formal alliance will be made.

Mr Dotcom said he could help Mana with technology and visibility and the party could help him gain a voice in Parliament.

"We want to make sure that we get our policies into Parliament and that our voters are not wasting their vote. So we want to get rid of this five percent threshold and we want to do that with alliances with other parties and politicians."