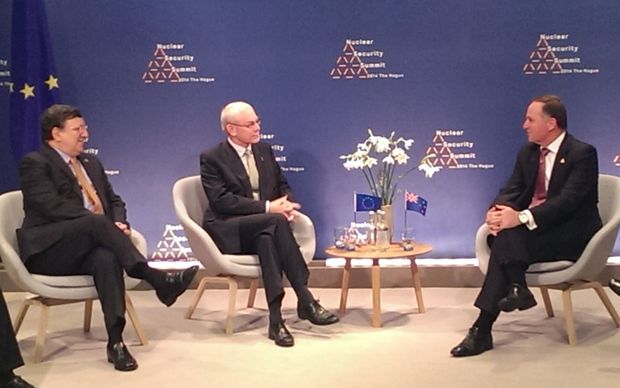 Prime Minister John Key is claiming to have pulled off a significant feat in Europe in convincing leaders there to consider a free trade deal with New Zealand, and that trade with Europe is worth more than $16 billion.

The EU and New Zealand will consider pursuing a free trade deal, with a scoping study expected to be completed next year.

She said Europe was heavily protective of its agricultural sector and would be equally aggressive as the Americans in seeking to weaken government drug-buying agency Pharmac and promote rules favouring big corporates.

"The EU will dangle the carrot of some market access for agriculture in return for new extensive rules for its pharmaceutical industries and its services industries such as its banks and its water privatisation companies and its telecommunications firms and so on," Prof Kelsey said.

European Commission and the European Council presidents Jose Manuel Barroso and Herman van Rompuy agreed a scoping study for a free trade deal would be carried out, during a meeting with Mr Key at the Nuclear Security Summit in The Hague.

Mr Key said any deal would eliminate the tens of millions of dollars New Zealand businesses paid in import tariffs to sell products in Europe.

It was a significant development as trade with Europe is worth more than $16 billion, and New Zealand had tried to get the European Union to consider a deal for a long time; to put it into context, trade with China was worth $18.2 billion, he said.

Trade with Europe could be boosted to $20 billion a year by 2020 under a free trade deal.

"While we have some preferential treatment for historical goods we sell here, like butter or sheepmeat, if you take kiwifruit as a great example we're at a significant competitive disadvantage because of those tariffs now."

A meeting was set for 2015 to decide on the next steps.

The EU's importance had diminished due to the rapid increase in trade with Asia, which was highlighted in sheep meat sales, where only 75 percent of the quota to Europe was filled, Mr Petersen said.

"Certainly, access to Europe has been hard for some products but what we've seen, of course, is very strong demand from China and the Asian region.

"This has been really a matter of the market working and, I guess, markets closer to home paying better prices."

However, that did not lessen the urgency of pursuing a better trade deal with the EU as quickly as possible, because the relationship with China could change, Mr Petersen said.

He said a political dialogue with EU members has always been seen as a pre-requisite for free trade talks, and that's been achieved by Mr Key during his visit.

He said it sounds as though Mr Key has moved the agenda on comprehensively.

"The point is of course that the EU is at 28 member states with over 500 million consumers pulling themselves out of a difficult economic situation in recent years but where we have important interests. So it does make sense to be able to connect with them in this way."

Analysts say a deepening of the trade relationship between New Zealand and the European Union is likely to be some time away.

While the EU is New Zealand's third largest trade partner, its importance has slipped in recent years as New Zealand ties its economic future to the faster growing Asian region.

The EU's trade priorities are also elsewhere, and it's focusing on completing trade deals with economic heavyweights the United States and Japan.

To put that into context, the EU and America already trade almost $US3 billion in goods and services each day.

By contrast, New Zealand is the EU's 54th largest trade partner, accounting for 0.2 percent of total EU trade in 2012.

The Green Party said it would welcome moves towards free-trade negotiations with the European Union if it means New Zealand signing commitments on human rights.