Prime Minister John Key is disappointed with Justice Minister Judith Collins, who has been embroiled in controversy about an alleged conflict of interest. 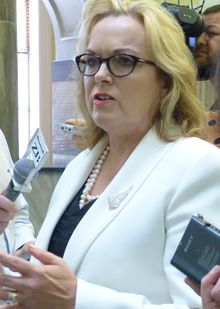 On Wednesday Ms Collins revealed for the first time that when in China last year she had dinner with the owner of a company of which her husband is a director.

She had already been accused of breaching Cabinet rules by visiting the Shanghai office of the company, Oravida, and praising its milk products.

Mr Key said he would not want to be in Ms Collins's shoes if she made another mistake.

"I'm very disappointed in Judith Collins," he said on Wednesday. "I actually think she's an outstanding minister but she's handled this situation very poorly, and I've made my feelings known to her directly this morning."

Mr Key said Ms Collins got it wrong, and she needed to learn from it. She should have advised him earlier about the dinner, and now there was a cumulative effect from her meetings with Oravida which could give rise to the perception of a conflict of interest.

Earlier on Wednesday, Ms Collins said the Prime Minister's chief of staff asked her on Tuesday night whether there were other meetings she needed to disclose.

"I think it's very important to be careful about any perceptions that anyone might want to draw," she told reporters. "The other thing is, hindsight's a great thing, and that's why I said 'I should have told you about (this) last week and I didn't'."

Ms Collins said she and her policy adviser had a private dinner with Oravida owner Stone Chi and managing director Julia Xu because they were close personal friends; she said her friends also invited a senior government official in a border control agency and they talked about tourism.

She continued to reject criticism that there was at least the perception of a conflict of interest in her visit to Oravida but did apologise for failing to tell reporters last week about the private dinner.

"I should have broadened it out," she said.

She also said she would not do it again, as it was important to be careful about perceptions.

Meanwhile, Mr Key admitted the Cabinet Office did not look at the Chinese version of Oravida's website when considering if Ms Collins had breached Cabinet rules.

He had previously said the Cabinet Office advised him Ms Collins's visit was fine because she did not endorse the company or its products. But he acknowledged now that the office considered only the English website description of the visit, which stated Ms Collins recognised the company's efforts.

After her visit, the company posted a Chinese-language website message saying she was full of praise for its milk.

Labour Party leader David Cunliffe said Ms Collins' admission was too little, too late, and she must stand down.

"There is a blindingly obvious actual conflict of interest, multiple layers of it, and if the minister can not see that, she's not fit to hold a warrant.

"If the Prime Minister can not see it, then his judgement is in serious question," Mr Cunliffe said.

Green Party co-leader Russel Norman said New Zealanders deserved to know the full story and called on Mr Key to release all the information he had on Ms Collins' trip.

"The Prime Minister needs to release the full facts. The Prime Minister has been less than fulsome in releasing information, and I think we need to see all of that before we can form a final opinion," Dr Norman said.