The Government may be acting outside the law by stopping New Zealanders from joining the Syrian conflict, legal experts say.

A lawyer and law professors say the grounds for cancelling people's passports are very limited and the Government's information would need to specifically link them to known terrorist groups. 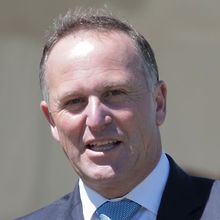 Fewer than 10 passports have been cancelled since this was permitted in a law change in 2005, and of them not all relate to the civil war in Syria. Prime Minister John Key says a small number of people have been stopped before leaving New Zealand and others who have made it to Syria are being tracked.

Confirming on Monday that passport cancellations had occurred, Mr Key said while it is not illegal for someone to go to a war zone, authorities will step in if they believe an individual is at risk or could be radicalised by the experience.

Andrew Geddis, a professor of law at the University of Otago, said on Tuesday the Government can only revoke a person's passport if it can specifically link them to known terrorist groups.

"There has to be a real basis for them thinking this about you. And then the definition of a terrorist act is also quite limited - it's not just going overseas to be involved in armed conflict or going to fight alongside someone - you have to basically be going into a war zone with the intent of killing or harming civilians - not just fighting against another armed force."

Professor Geddis said if someone felt their passport had been revoked unfairly, they could seek a judicial review.

Wellington lawyer Graeme Edgeler said the Government needs to show that the person could pose a security risk to New Zealand on their return and information the Prime Minister has provided so far does not give him confidence that the Government's actions have been lawful.

John Key on Tuesday rejected suggestions that the Government has been racist by cancelling the passports.

Mr Key said people are not being unfairly targeted and passports are only cancelled when there is good reason to do so. He said some whose documents were cancelled eventually agreed it would have been a silly thing for them to go to Syria.

Ali Akil, of Syrian Solidarity New Zealand, told Radio New Zealand's Morning Report programme on Tuesday he understands the only people intending to go to Syria whose passports have been cancelled are two brothers.

"According to my sources their parents were the ones who called up and asked for them to be stopped. Instead of scaremongering and providing twisted information for political gain we urge John Key and the Government to do more to meet its international humanitarian obligations."

Mr Akil said fears people could become radicalised are based on racial prejudices and it shouldn't be up to the Government to decide if people should join the rebels.

Labour Party foreign affairs spokesperson David Shearer said there needed to be a more detailed explanation of the reasons for cancelling people's passports and suggested John Key had raised the matter as a smokescreen.

"There was some discussion about whether he's doing this simply to divert the fact that he got nothing out of the Australian talks and this is a way of being able to push the attention somewhere else."

At his news conference on Monday, when the matter was raised, Mr Key spoke first about his Australian trip and gave some details about the cancellation of passports only when questioned by reporters.

Intelligence and policy analyst Paul Buchanan earlier told Morning Report the announcement was to show the Muslim community in New Zealand is being monitored effectively by intelligence agencies in New Zealand, however it is a risky move to make such information public.

"He's now alerted others of the same persuasion that their organisations have been infiltrated, that there may be informants in the Muslim community that are revealing the identities of those who want to join the Syrian conflict."

A senior lecturer in international relations at the University of Melbourne, David Malet, said cancellations of passports in Australia had been counterproductive because they antagonise people.