A report into the leaking of Cabinet papers on the restructuring of the Ministry of Foreign Affairs and Trade was a colossal waste of money, Labour's Phil Goff says.

The State Services Commission asked Paula Rebstock to conduct the inquiry after the Government became outraged at information being leaked to Mr Goff, the party's foreign affairs spokesperson.

The report found that the source was most likely to be a temporary staff member at the State Services Commission, who used to work for the Labour Party, but could only say there were strong suspicions that person was responsible.

The investigation and legal defence cost the State Services Commission $510,000.

Mr Goff said on Thursday the 18-month inquiry was expensive and inconclusive, and all it does is expose the damage done to an effective ministry and a committed group of civil servants in the name of cost-cutting and ideology.

"Half a million dollars spent on it, with no conclusive evidence at the end, as to who leaked the material. But the real cost is actually that 18 percent of the skilled, good and experienced staff of the Ministry of Foreign Affairs left within a year of that restructuring." 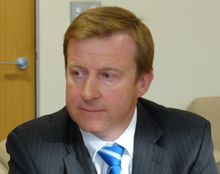 But State Services Minister Jonathan Coleman said Mr Goff is a central figure in the report and is implicated in senior public servants compromising their political neutrality.

"I mean it shows very clearly this person worked in the Labour Party research unit. They are under strong suspicion - so you know, you can draw you're own conclusions - of having copied that paper and it ended up in Phil Goff's hands. And I'd say Phil Goff's name is throughout this report and this reflects very poorly on him."

The investigation was held up while the Court of Appeal heard an appeal by a clerical assistant at the centre of the investigation who wanted a judicial review of the draft report. That appeal failed, clearing the way for the report to be completed.

State Services Commissioner Iain Rennie said on Thursday if the leak came from within his agency, then that individual has badly let down their colleagues. 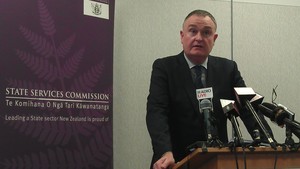 "I'm extremely saddened and disappointed by this. I am very proud of my team at the commission and the way that on a daily basis, they handle sensitive information with discretion and professionalism."

Mr Rennie said changes have been made which he is confident will reduce the risk of someone doing this again.

The Public Service Association said the investigation into who leaked the MFAT document to the Labour Party created a climate of fear among public servants involved.

National Secretary Brenda Pilott said while some public servants at the centre of the inquiry were not named, people know who they are and it will be very difficult for them.

"I imagine it has been enormously stressful and I expect costly for those individuals involved and essentially they have been tarred with various offences, as it were, without any proof of that. There's a natural justice test that I think this report has failed on dramatically."

Pair in report identify themselves

In her report, Paula Rebstock singles out two other senior managers who worked at MFAT at the time, saying they opposed the restructure and created a perception that it was acceptable for any opposition to be aired publicly and politicised.

Two people criticised in the report identified themselves on Thursday. Nigel Fyfe, a former senior manager at MFAT, said he had done this to avoid any unfair effect on other past or present ministry staff. Derek Leask is a former diplomat and Head of Mission.

Both dispute the report's findings and are critical of how the investigation was conducted.

Mr Fyfe said at no point did he leak any material and always acted within the State Sector Code of Conduct.

He said he repeatedly asked Ms Rebstock to identify any specific instance where he breached that code, but none was forthcoming. He said the final report is unreliable, unjust and contains many errors of fact.