United Future leader Peter Dunne has told party members that in a year of upheaval, the party's flame has continued to flicker and it's vital it continues to do so.

About 30 people gathered at the Johnsonville Community Centre in Wellington on Saturday for United Future's annual conference.

Mr Dunne emphasised the party's focus on families and communities, and its efforts to protect the environment. 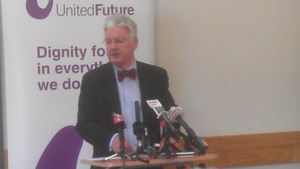 The party's sole MP resigned as Revenue Minister in June after refusing to comply with an investigation into the leak of a report on the Government Communications Security Bureau; and his party temporarily lost its parliamentary funding after being de-registered.

Mr Dunne said the National Party would need help from other parties to remain in Government and so should be actively supporting its current partners before the election.

But he said United Future would be unlikely to support the Labour Party because of key differences in position, particularly in regards to tax policy.

Peter Dunne also told the conference environmental concerns have been hijacked by what he calls the Green Taleban.

He said one does not have to be a social activist to be legitimately concerned about the environment.

Mr Dunne said United Future is a pragmatic party for New Zealanders who care passionate about the environment, but don't buy into what he calls, the leftist mantras of the Green Party.